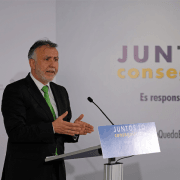 The Canarian Government’s emergency committee will meet tomorrow to formulate a proposal on how the islands can exit the lockdown, following Pedro Sánchez’s recognition of the need for “different responses” in Spain’s regions.

Addressing the nation on Saturday, Spanish President Pedro Sánchez said “There are people viewing this speech from La Gomera, Teruel or Madrid, and the incidence and impact of the pandemic is different. There will be a global task, but distinct responses and levels in every region.”

Canarian President Ángel Victor Torres responded by announcing that he would convene his government’s emergency committee tomorrow, with the aim of providing proposals for a  “return to normality” on the islands. The initial proposal will be for the whole of the Canaries, but may include measures allowing the least-affected islands to lift lockdown restrictions early.

Torres stressed that the key to finally defeating the coronavirus would be strict controls at airports and ports, and a massive testing programme.  “We’re reaching the endgame,” he said. “Now we need to approach the second phase – the return to normality, knowing that nothing will be exactly the same.”

The current situation in the Canaries indicates that the smaller, peripheral islands appear to have avoided or  temporarily halted the virus, while medium-sized islands are well on the way to doing so. The two largest islands exhibit the highest risk.

Fuerteventura, Lanzarote and La Palma make up the next group of islands which are more seriously affected. None of these medium-sized islands has registered significant amounts of new cases in recent weeks, but while the lockdown appears to be working, it is probably still too early to consider lifting it significantly.

La Palma’s figures are perhaps the most surprising. With a relatively small population  (87,000 compared to  Lanzarote’s 150,000) and no international airport or mass tourism, it has still recorded the third-highest amount of cases and deaths.

The capital islands of Tenerife and Gran Canaria are the worst affected, with Tenerife  accounting for almost two-thirds of all Canarian cases and deaths. Almost all of the new cases reported originate on these islands and, although these islands are still nowhere near as badly affected as mainland hotspots such as Madrid and Barcelona,  it is likely that they will remain under the strict lockdown conditions for longest.

Recorded cases on the Canary islands.

(Active cases are in brackets)

Make friends and discover Lanzarote on a bike!
Spotlight On: Blas Martínez

After The Fire
Scroll to top