This month’s story comes from Martin McCormack, a musician who immortalised a Lanzarote bar in the form of an electric guitar. 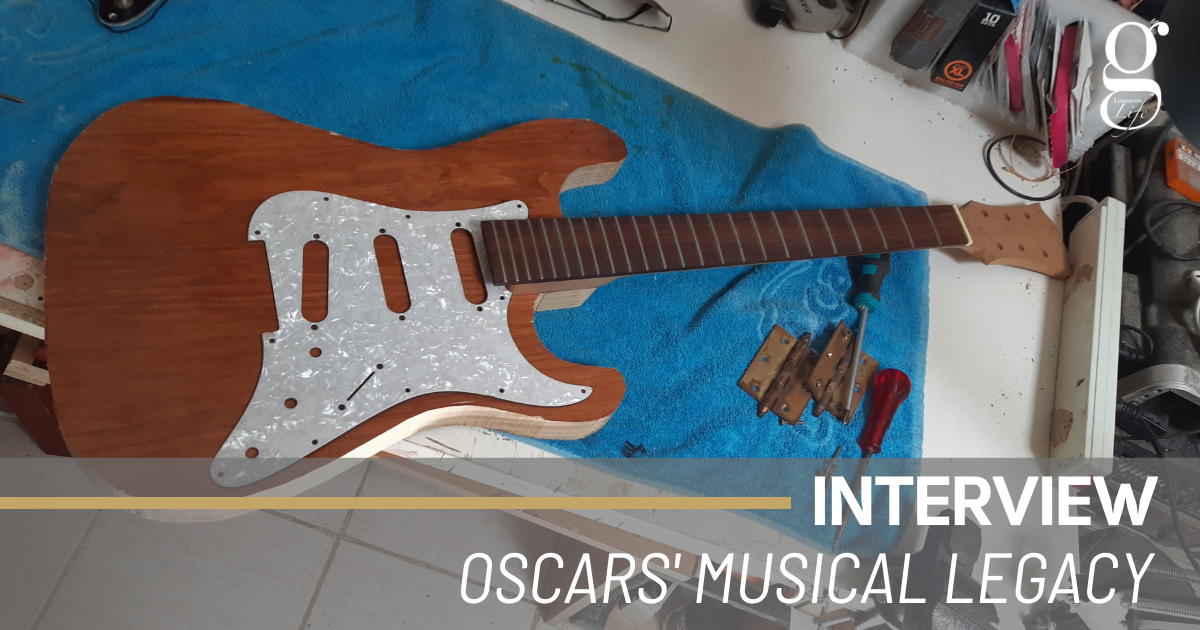 When did you start to play the guitar, Martin?

I’ve been playing since the 1980s! A marching band sparked my interest in music, later going on to drums and then the clarinet. My Dad was a clarinettist and taught me to read sheet music from a young age, which helped me greatly.

What are some of your favourite bands?

My current favourites are Neil Young, Bob Dylan, JJ Cale, Hendrix and Gary Moore. Although, the go-to guy at the moment is Joe Bonamassa.

How long have you been performing live?

I started in the 1990s and loved it. The past year and half have been tough for musicians, though. I took the time to learn new skills like playing the piano, banjo and making my very own guitars.

You’ve made a guitar! What gave you the idea?

My friend, Marc Johnson, had recently given me two guitar necks that he didn’t need. I had a few spare parts lying around at home, so the idea to try and make a guitar came from there.

A local bar called “Oscars” had closed during the lockdown and the owners still had the wood from the bar. I asked if I could take the wood and they agreed. The piece that I ended up using was from the flap entrance to the bar, it still had the hinges attached!

What was the process of making the guitar?

Using the body of another guitar as a template, I jig-sawed the shape and allowed space for the electronics, pickups and switches.

Halfway through the build the whole piece broke in two! Luckily I was able to use glue and screws to secure it back together. I’m not a professional at making guitars, yet!

I strung the guitar and tuned it accordingly, it sounded great. I named the guitar “Oscar” after the bar.

Is it easy to source guitar parts on Lanzarote?

Getting to know the bar owners helps. They can be a great source for bits and pieces as well as putting me in contact with other performers who might have spares.

Have you used Oscar live?

I used him last week at a gig in Playa Blanca, the guitar sounded great. I just need to find somewhere to keep him now, I’m running out of wall space!

Best of luck for any guitars that you may make in the future, Martin!

Eye in the sky
Level 1 remains, despite rise in cases