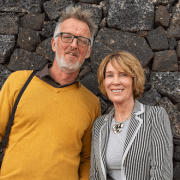 With plenty of experience behind her in the Canarian tourist industry, Jackie Stevenson was an obvious choice to replace Esther Martín at the Vice Consulate in Las Palmas last summer. Shaun Addison headed over to meet her and her team.

Who works here at the Consul offices, Jackie?

Currently it’s myself and Consular Officials Caroline Sproule and Monica Matos. We’re really missing Victoria Innes, who was Brexit Support officer until that role terminated at the start of the year.

And what does the job involve?

It’s different every day. I can be visiting hospital or a prison, helping stranded families get back home or dealing with a sexual assault case. But helping vulnerable Britons takes priority now. Replacement documents are now done online and, while we still do some notarial work and citizenship ceremonies, it’s not the main element of what we do.

The collapse of Thomas Cook must have been the first big test of your new position. How was that for you?

It was shocking, not least because I worked for the company for several years and knew many of the employees affected very well. I’d heard that there had been hard times in the company, but also that things were looking good, so it came out of the blue.

Suddenly we had 81 flights of holiday makers to repatriate. We were given emergency help, and the Civil Aviation Authority also laid on assistance, but it was hard work. Before that we’d had the forest fires in Gran Canaria, which caused horrific damage, so overall I was in at the deep end.

What is your background, exactly, Jackie?

I’m from Edinburgh and started as a tax officer originally, which didn’t win me many friends. But one holiday I went to Ibiza and realised I wanted to seek a career in the sun. I started out with IAG, Sunworld and Airtours before ending up as Thomas Cook’s group destination manager, overseeing operations that affect more than 23 million customers.

You were on Lanzarote for a while, too.

Yes. My mum loved it there and decided to move over. I warned her that I was going to be relocated to Gran Canaria, and that’s what ended up happening the week she arrived.

Do you get back often?

I’ve visited about four times so far this year. It depends what cases arise, but I have thought that Lanzarote would be just as good a place to base the Vice Consulate. There are 1.3 million visitors a year which is a lot of people. But Las Palmas as the capital of the province is simply better for contact with key authorities and the serious hospitalisation cases we support. We are also very fortunate to have a great Honorary Consul Sue Thain who is based in Lanzarote . I can get around quickly, in any case.

You’re not the only Canarian Vice Consul. Do you have much contact with your Tenerife counterpart?

All the time. Helen has been in the job for decades and knows it backwards, so I often ask her for advice and tips.

How is Brexit affecting what you do?

Well there are the outreach events for a start, such as the one that took place in Lanzarote last month. It’s important that we get the message across that people living in Spain should get registered, sign on the padrón, get a health card if they’re eligible and update their driving licence.

Before the end of the year…

Yes. I think a lot of people were hoping it wouldn’t happen, but now it has, and there’s no hope of a reverse, so it’s time to prepare.

Another thing we’re trying to publicise is the Support in Spain website (www.supportinspain. info), which offers detailed help and contacts for any British citizens in Spain with questions about benefits, healthcare, disability etc. It’s mainly aimed at older expats, and while British communities on the Canaries are generally younger than those in Alicante, Murcia and similar places, the advice is still relevant to many.

Rights have been guaranteed for those who are residents by the end of the transition period, but do you think it will affect the amount of people who arrive after that date?

I think if you’re thinking about moving to Spain, now’s probably the time, but there’s always a way. After all, this country has plenty of people who’ve arrived from third countries. It may be a bit more complicated, but it will be possible.

Also, there will be agreements. We just don’t know what they’ll be yet, but the Spanish authorities are being very collaborative and extremely open to work with. There’s a good relationship there.

Eye in the sky
Face to Face: Councillor for Tourist Promotion

Lines in the water
Scroll to top