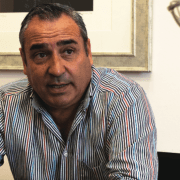 Ángel Vázquez has had a busy year. As the Cabildo’s Councillor for Tourist Promotion he’s expected to attend trade fairs throughout Europe and have meetings with all sorts of people related to the planning and management of tourism on Lanzarote. But last year his job suddenly became a lot more challenging, first with the withdrawal of Ryanair’s Canarian bases, then with the shocking collapse of Thomas Cook, which devastated the winter schedules.

Nevertheless, despite these events Lanzarote was the only one of the Canary islands to increase its tourism figures in 2019, and hopes of fully recuperating the Thomas Cook share of the market are high. Much of this is due to firefighting work by Ángel and his team.

How did the collapse of Thomas Cook affect your work?

It hurts when a company fails, and especially when it’s as important as Thomas Cook. We knew we had to react rapidly, and that’s what we did. We’ve been in constant touch with airlines and tour operators, not just at the trade fairs, and it’s been giving results.

What kind of results?

In the coming summer we’ve seen a 20% rise in flights from Spanish airline Vueling and a 22% rise in Jet2 routes from the UK. TUI UK have also increased their packages by 14%.

There’s lots of talk about the Canarian Government introducing a tourist tax. Does the Cabildo have a position on this issue?

Not currently. Personally, I’m against it. I’m a member of the PP and we don’t want any new taxes, but we’ll have to wait and see what happens. It’s not an issue right now, though.

Some ascribed Ryanair’s withdrawal to setbacks the airline suffered due to problems with the Boeing 737 Max. Is that true, and is there any chance that the company’s base may return?

I think there were many factors, but Ryanair relies on Boeings, and I’m confident that once its fleet is back to normal, we’ll see more Ryanair flights to Lanzarote. I doubt the base will come back, though, and I don’t think we really need it.

Are there any particular nationalities you’ll be focusing on in the future?

No. We’re seeing more and more tourists from France, Italy and other countries that haven’t traditionally had a presence on Lanzarote. That’s not because we’re focusing on any nation in particular, though. The aim is to diversify our tourist market, as it’s a bad idea to rely too much on any one group.

Do different nationalities have different requirements?

Yes, we have access to big data that shows us that the French value gastronomy, culture and heritage; Scandinavians are interested in ecological holidays; Italians come for fiestas and music and the Spanish like to eat out a lot, for example.

Has Lanzarote been lucky to profit from the instability in rival destinations such as Turkey and Tunisia? How will we compete now these destinations are recovering?

I don’t think about that. What we cannot afford to do is wait for other destinations to fail. We need to build on what we’ve got, and promote what is unique about us. That includes the fact that we have a beautiful island, excellent products and maximum security. Let other places court cheap tourism – we’ll focus on quality.

Ángel Vázquez highlights six areas where Lanzarote will be focussing its promotional efforts in the near future.

BUSINESS: Lanzarote is positioning itself as a centre for national and international conferences.

FILMS: The island is keen to attract film makers and advertisers to shoot on the island, which has already become the backdrop for several feature films, music videos, fashion shoots and advertisements.

FOOD AND DRINK: The Saborea Lanzarote Food fair in November is the flagship event, but several other fairs and promotions are held each year.