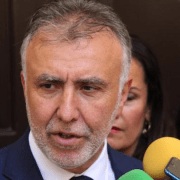 Canarian President Ángel Víctor Torres warned that Morocco will be confronted by the Spanish and Canarian governments if it “touches one millimetre of Canarian waters.” His statement was accompanied by a flight of F18 fighter jets that was widely interpreted as a show of force by Spain.

The warning follows a Moroccan government motion extending the nation’s sovereignty to waters reaching a maximum of 350 kilometres from the shores of Western Sahara; the disputed territory that has been occupied by Morocco since 1975.

This changes the situation from the state it has been since 2003, when Spain and Morocco reached an informal agreement that waters would be delineated at the half-way point between both countries. However, despite the unofficial existence of this sort of agreement, Morocco has never formally recognised Spain’s sovereignty over Canarian waters.

Currently the Spanish Economic Exclusion Zone extends for 200 miles around the islands, except where distances between foreign territory are shorter. So, for example, it currently extends half-way between Lanzarote and Morocco to the east, and half-way between Tenerife and Portugal’s Selvagens Islands to the north.

Morocco’s claim to the waters is also exacerbated by the fact that Western Sahara remains a disputed territory. Morocco claim sovereignty over the ex- Spanish colony, but this has been rejected by the UN and the EU.

The Canary Islands are just the visible examples of a series of a hundred mountains that were thrown up by volcanic action. They extend from Mount Essaouira north of Lanzarote to Tropic south of El Hierro.

And it’s Seamount Tropic that many believe is the reason for Morocco’s claim – or counterclaim. In 2014 Spain petitioned the UN to extend it’s exclusion zone beyond 200 nautical miles in order to include Tropic. Two years later, a Spanish/British expedition to Tropic concluded that the underwater mountain is a rich source of the valuable minerals cobalt and tellurium.