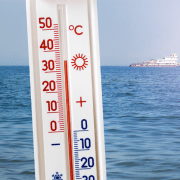 Lanzarote has been placed on a yellow alert for high temperatures over the next three days, as forecasters predict that temperatures could reach 35 degrees celsius in inland and southern coastal areas.

The yellow alert is the lowest level of alert for heat, and means that temperatures can reach levels which could prove dangerous for babies and small children, the elderly and those with chronic medical conditions. Yellow alerts are fairly frequent on the Canaries, but temperatures can occasionally be much higher than predicted.

All of the Canaries have been placed on a similar yellow alert, apart from the southern half of Gran Canaria, which is on an orange alert – the next level up. Temperatures there could exceed 39 degrees.

If you look at the horizon or run your finger along your car, you’ll also have noticed that Lanzarote has started the week with a mild calima, with a light film of dust arriving from the Sahara desert. Mornings are predicted to continue cloudy, while winds will remain stiff, and could reach 40 kph tomorrow.

The high temperatures in the Canaries are part of a much larger wave of heat that is taking place throughout much of North Africa and Spain, and which is a slightly early arrival of the traditionally high temperatures that normally commence in mid-July and last through August.

Locals celebrating the freedom of the end of lockdown have been advised to take sun protection seriously on beaches and elsewhere.  Despite the cloud cover of recent days, UV levels remain at around 12, which creates extreme risk of sun damage from unprotected exposure.