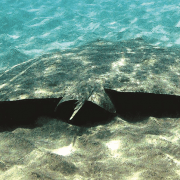 While the lockdown has been bitter for many humans, it has been good news for marine wildlife and the environment on Lanzarote, with killer whales seen leaping off the coast of Costa Teguise and waters virtually undisturbed by boats or humans.

The slowdown in activity has also slashed air pollution levels, especially in the city of Arrecife. The 80 most densely populated towns in Spain have seen an average fall, of 51% in nitrogen dioxide levels. However, this pollutant, caused mainly by traffic, has fallen by 90% in Arrecife, the biggest decrease in Spain.

A sky free of vapour trails shows how air traffic has fallen in the islands, and a similar reduction in maritime transport has given the creatures that live off our shores a break they haven’t enjoyed since the last prolonged spell of bad weather. Maybe the humpback whale filmed leaping out of the sea at Las Caletas near Costa Teguise recently wasn’t celebrating its freedom, but it certainly looked as if it was.

This unexpected respite can only be good news for islands that are already, in many ways, a safe haven for marine life. The angel shark, which is endangered in most of the rest of Europe, is still found frequently here; while the Rays of Paradise project recently revealed that La Graciosa and the waters off Playa Chica in Puerto del Carmen, are places where the Spiny Butterfly Ray (Gymnura altavela) is particularly abundant.

Known as a mantelina (tablecloth) in Spanish, this ray is a stunningly beautiful creature, with broader “wings” than most rays and an intricate mottled camouflage pattern that almost looks floral. It can often reach more than two metres from wingtip to wingtip, and it’s graceful, gliding swimming style is smooth and attractive.

Researchers plan to tag rays electronically to find out about the movements and daily routines of these mysterious fish.