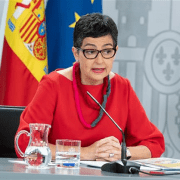 Spain’s Foreign Affairs Minister, Arancha González Laya, has said that Spain will open negotiations with the UK to reopen air bridges to the Canaries and Balearics following Mondays announcement of a new “islands policy” by the UK government.

Currently,  the rates of infection on Lanzarote remain far too high to realistically expect any reversal of quarantine restrictions in the immediate future.  However, the UK’s announcement now offers a clear objective for the islands to work towards, without fear of being adversely affected by high infection rates on mainland Spain.

On Monday, UK Transport Minister Grant Shapps announced that the UK had “enhanced data” which would allow the government to operate an “islands policy” when deciding which regions to quarantine or exempt from quarantine restrictions in future.

The news will be welcomed on the Canaries, which are working all out to reduce infection rates in order to permit a return of tourism, but it also raises questions as to which data the UK government has suddenly acquired, given that several other countries have been operating island or regional policies for months.

The UK government’s website says that “changes will only apply to land that has a clear boundary or border where there is robust, reliable and internationally comparable data available.” but reliable data has been available from both the Spanish and Canarian governments for months, with no notable changes recently.

Germany and Belgium have divided Spain into regions since tourism recommenced after lockdown, a policy which allowed the Canaries to benefit from several weeks of business before recent increases in infection rates led to  the islands being blacklisted.

And last Thursday, Wales also announced restrictions on the Greek islands while leaving mainland Greece exempt: Wales also permitted arrivals from Madeira and the Azores to continue as normal while placing restrictions on mainland Portugal once again. Wales’s  health minister Vaughan Gething, mentioned nothing about new data or an island policy when announcing the changes.

Meanwhile, the UK’s decision highlights the continued decision of Scotland and Northern Ireland to operate their quarantine restrictions on a national basis. Currently, a tourist returning from Athens to London or Cardiff is not required to quarantine, but they would be legally required to do if they landed in Glasgow or Belfast. The Republic of Ireland has also operated strict national restrictions since lockdown ended.