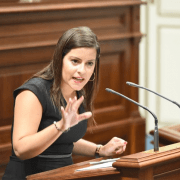 The Canarian Government continues to fight for the right to test tourists, and may even set up marquees outside airports to do it, according to an interview with Canarian Tourist Councillor Yaiza Castilla, which appeared in Canarias7 recently.

In a wide ranging interview, Castilla said she was aware that the Canaries had passed the limit of 50 cases per 100,000 in the last 7 days that would theoretically cause Germany to suspend its recommendation to travel to the Canaries, and said “I don’t know what decision Germany will take, and I hope it continues to include us on the safe destinations list, but if Canarians don’t realise the importance of the situation and act accordingly, things will go badly.”

Castilla once again stood by the idea of PCR tests at origin and on arrival, referring to the Canary Fortress project which depends on the idea that “our airports and ports are our weakness but also our strength – the difference we have in respect to mainland Spain.”

Castilla blamed the absence of testing on the European Union and the central  Spanish government “I believe that the European Union hasn’t risen to the occasion, “ Castilla said. “They should have led the field from the very first minute, because we are facing a global pandemic.”

“Also, there is the eternal historical problem of Madrid not understanding the unique aspects of the Canaries. Lots of people are suffering here, but Madrid doesn’t recognise the reality of what happens in the Canaries, and that’s where we must focus our efforts,” Castilla concluded.

The best of times
Scroll to top