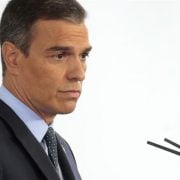 Spanish President Pedro Sánchez yesterday announced that he would grant Spain’s regions full power to impose lockdowns and other anti-Covid measures on all or part of their own territories.

“Requests based on health grounds can rely on the support of the government and it’s parliamentary majority, “ Sánchez announced, stating that regional Presidents would have the sole power to propose lockdowns and other local measures.

The decision follows calls for the government to take control of the worsening situation in Spain, but also avoids the drastic centralisation of power in Madrid that marked the State of Alarm that last from mid-March to mid-June. At that time, Sánchez found it increasingly difficult to gain support for the repeated lockdown extensions.

This solution leaves decision-making power in the hands of regional Presidents, and guarantees the potential support of central government for measures that regional governments do not usually have the power to impose. Critics also allege that it removes responsibility from central government.

“Progress isn’t good, above all in certain regions that are performing worse than others, “ said Sánchez. “But we’re still  far from the situation we faced in March. Right now we must not let fear paralyse us. Covid-19 cannot become the master of our lives.”

Spain consists of 17 autonomous communities and the autonomous cities of Ceuta and Melilla, all of which have their own governments. While the Canaries is governed by a coalition led by Sánchez’s colleagues in the Socialist Party, other communities such as Catalonia and the Basque country are ruled by nationalist parties with a deep historical aversion to central control from Madrid.

Madrid itself, and vast regions such as Castilla y León and Andalusia are currently ruled by the opposition PP, who have been increasingly critical of Sánchez’s management of the crisis. Madrid, in particular, has notably gone against government recommendations on issues such as compulsory mask use and closure of certain businesses.

Sánchez also announced that 2,000 military workers would be made available for tracking and tracing duties in the worst-affected areas, and urged Spanish citizens to download the Radar Covid app to their smartphones. The app uses Bluetooth technology to warn citizens when they have been in close contact with suspected or confirmed  cases of coronavirus.

“Tests have always been the solution”
Scroll to top