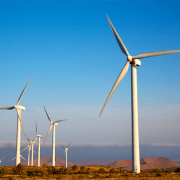 After seven months of preparatory work, the wind turbines that arrived from Germany last week are ready to be installed. The Arrecife windfarm, located near Zonzamas, is expected to be fully operational by the end of the year.

The addition of the new windfarm brings the total to 4 active windfarms operating in Lanzarote. The parts arrived at Puerto de los Marmoles from Germany in large sections, and transporting the 71.0 m diameter blades was  a tricky task due to their size. Over  the next few months, the turbines will be constructed and enter the testing phase; they should be fully operational by the end of the year, or early 2021 at the latest.

Elecnor are responsible for constructing the windfarms with a budget of 11 million euros and are also expected to begin works on future projects in San Bartolomé, Teguise and Arrecife.

The new windfarm will produce 28,605 mWh which will be sent to the Callejones substation in San Bartolomé, which is also supplied by the turbines in Teguise.

Lanzarote has an annual demand of 891.9 GWh (gigawatts per hour), an increase of 9% since 2010. Each resident uses an average of 6,000 kWh (kilowatts per hour) per year – a figure close to that of mainland Spain but higher than the average for the Canary Islands.

Make friends and discover Lanzarote on a bike!
The best of times