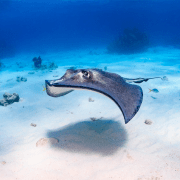 Bathers at Papagayo were surprised by a large stingray which swam close the shore on a sunny day last month.

Although local press identified the fish as a manta ray it was, in fact, a round fantail stingray, a species which is little-known but fairly common around our shore. The ray is recognisable by its deep black colouring and circular shape, and can grow up to two metres in size. Despite their fearsome appearance, stingrays are harmless unless molested.

Meanwhile, a mystery creature at Famara left a child bleeding from the foot. There has been argument as to whether the wounds were caused by a mako shark or a bottom-dwelling angel shark.