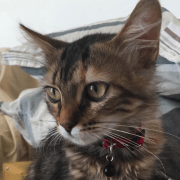 Michael and Claudia responded to our appeal for rescue animal stories with the following letter:

“We live in Costa Teguise in a small apartment so we couldn’t keep a dog. But we saw a Sara plea for help as they had so many cats. When we visited we didn’t even get past the boxes in the vet’s room as the kittens there were crying out for help. We wanted to take them all, but decided on one who kept reaching out through the cage. Rihanna is now called Daida.

There was one other little thing hiding in the back of her box who had been found in the sea and looked like a drowned rat. We thought “One’s enough.” But after three days with Daida jumping around the house my partner Claudia kept thinking about the other poor little cat. So we went back and got that, too. She’s Raffaella now known as Elsa.

They both seem very happy together and Elsa has gone from hiding under the bed to sitting on the couch and exploring outside.

If anyone can please rescue an animal or at least donate to Sara. They have a fantastic team up there.”