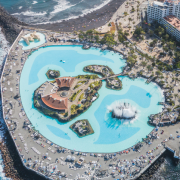 César Manrique’s works aren’t just confined to Lanzarote. He worked on various projects elsewhere on the Canaries and further afield during his incredibly productive years. 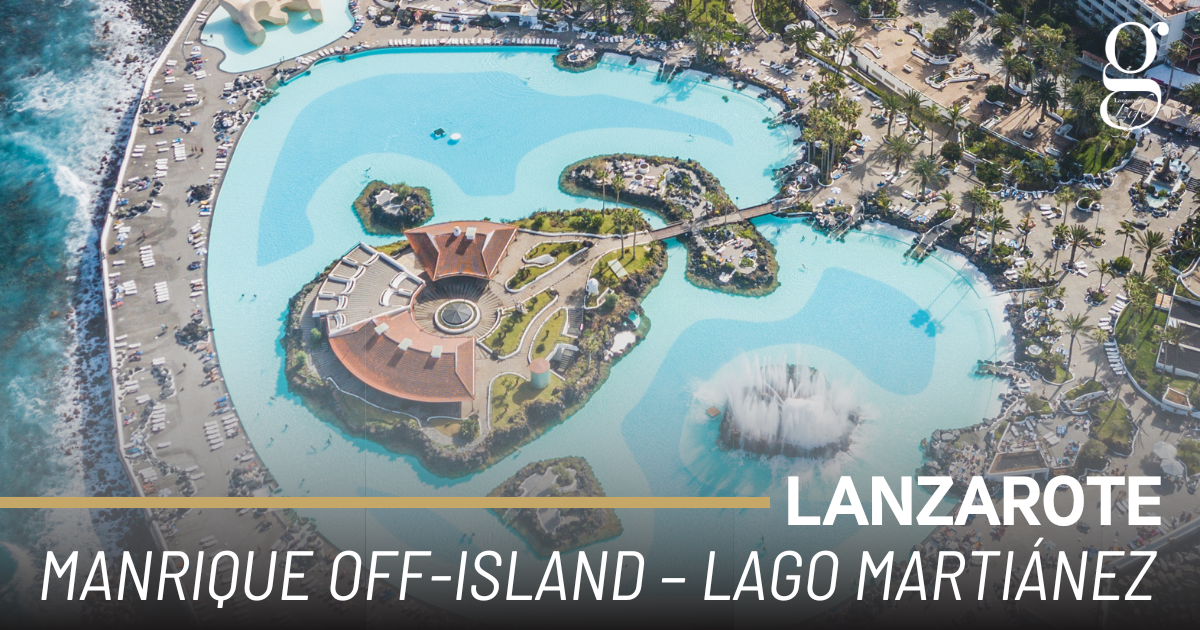 The Lago Martiánez is located on a headland in the unique Tenerife resort town of Puerto de la Cruz. It’s one of Manrique’s most impressive and best-known works outside his native island of Lanzarote. The Lagos, as they’re known locally, were constructed on the site of the Lidos de San Telmo, open-air pools by the sea that were frequented by visitors such as Winston Churchill, the Beatles and Aristotle Onassis.

In 1967, Manrique was contracted as artistic director of a radical reform of the pools, which added three pools, one of which had a central island with a bar. Known as Los Alisios, these pools were officially opened by the legendary French star Josephine Baker in 1971.

In 1975, the second phase commenced, building an immense lake next to the existing pools and adding sculptures and local plants and trees. This is Manrique in full flow, and the lake was opened to the public in 1977.

The Lagos are now part of a much larger complex called Costa Martiánez, and remain hugely impressive, with Manrique’s trademark touch visible at all points, especially in the presence of two of his “wind toys”, and an incredible, surreal, red-and-white sculpture for children known as “The Cuttlefish”.

The pools remain a brilliant aquamarine colour, and, although the unheated sea water can be a bit bracing in the winter, it’s still a popular place for bathing and sunbathing, with thousands still happy to pay the €5.50 entry fee to the complex.

After Lanzarote, Tenerife is probably the place where the presence of César Manrique is most visible.

In 1957, before his New York adventure and his return to Lanzarote, Manrique was invited to create a mural in the impressive art deco building of the Royal Casino in Tenerife. This started a relationship with the island that would result in the extensive works of the Lago Martiánez.

Later, he was invited to create a mural at the plaza San Juan Bautista de la Salle. The Flying Fish that he created in seven colours, remains one of his most popular designs.

Four days before his death in 1991, Manrique submitted the design for the Homage to Santa Cruz, a large abstract sculpture located on a roundabout on the approach to the island’s capital. It was to be his last work.

The birthplace of Canarian tourism

Puerto de la Cruz, on the northern coast of Tenerife has few beaches and a slightly faded air, but it’s the birthplace of Canarian tourism – home to a spa and casino which attracted a cosmopolitan European clientele.

In 1888, the Orotava Grand Hotel in the resort was the first Canarian hotel ever to be overbooked, due to demand from British visitors, and later, in 1927, crime writer Agatha Christie arrived at the Hotel Taoro.

Later, in 1963, Paul, George and Ringo from the Beatles spent 10 days in the resort (John preferred Torremolinos). During their stay they offered to play at a local nightclub for free, but were told by the British owner “This isn’t a place for long-hairs, it’s for respectable people.”

30 years after the Beatles visit, the Hotel Botánico in Puerto de la Cruz hosted Michael Jackson, as he performed in the island’s capital.