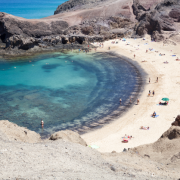 Lanzarote owes its popularity to sun and sand, and the island’s beaches are where those two elements reach perfection. Whether you’re seeking a safe, family-friendly beach or a wild, deserted strip of virgin sand, you’ll find it here. Here’s our brief guide to the best and most famous beaches on the island – but bear in mind that there are many more. 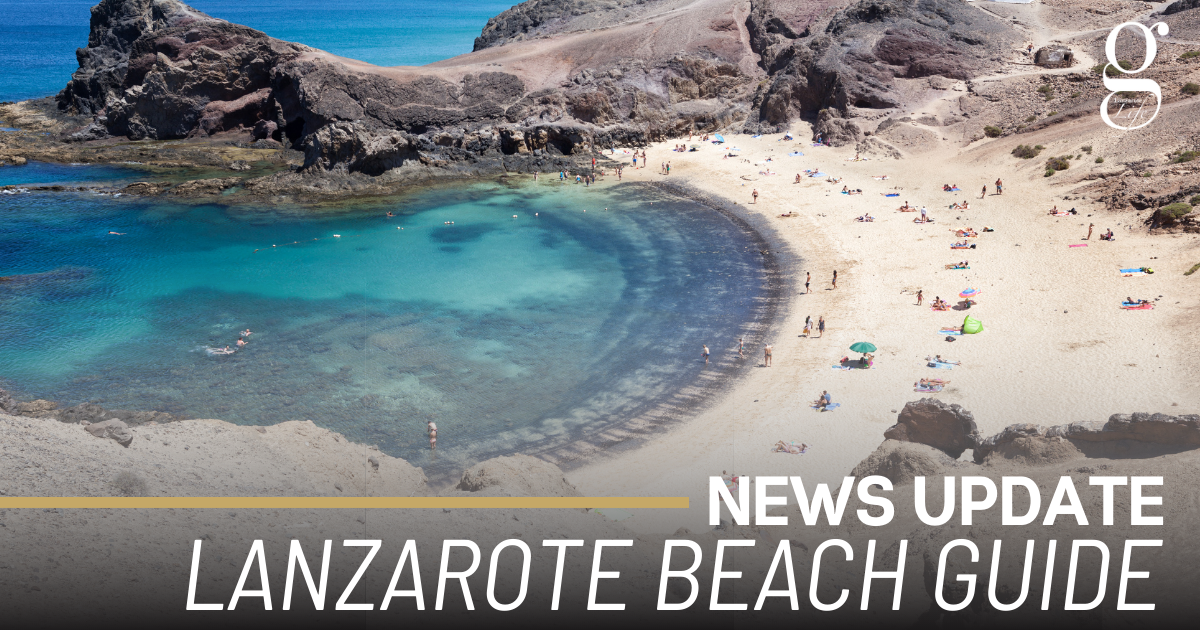 Lanzarote’s biggest resort was built alongside miles of golden beaches and three of them remain the dominant beach areas of the resort. They are, from west to east, Playa Grande, Playa Los Pocillos and Playa Matagorda. Each one is a Blue Flag beach with acres of clean sand, sunbeds, facilities nearby and safe bathing.

Costa Teguise’s largest beach is Blue Flag winner Playa Las Cucharas, a wide sweep of sand in front of a busy promenade. The bay is sheltered, but stronger breezes offshore mean that this is the island’s windsurfing hotspot.

Around the headland is Playa del Jablillo, a resort beach that has everything a family could need – warm sand, sheltered nooks, rocks for diving off and rockpools for exploring.

A short walk further west will bring you to Playa Bastián, with darker, coarser sand and an open, unsheltered beach.

Playa El Ancla (also known as the King’s Beach) is a hidden gem tucked away behind the Occidental Lanzarote Hotel – the shore is a bit rocky but rarely crowded and the lagoon is perfect for bathing.

The two specially-created beaches in Playa Blanca are Playa Dorada and Playa Flamingo. Both are sheltered by man-made windbreaks and offer golden sands and safe bathing, as well as other activities. Playa Blanca’s town beach is right in front of the promenade, overlooked by several restaurants. It’s small, perfectly formed, and usually busy, with a Blue Flag fluttering aloft.

Arrecife’s main beach is Playa del Reducto, a stunning Blue-Flagged crescent of pale sand at the foot of the Gran Hotel. All buses to Arrecife take you close by, and there are plenty of options for food and drink nearby. Sand is raked and cleaned each morning, and bathing is safe.

Playa La Garita, on the southern edge of Arrieta, is a classic local beach – the sort of place where you’ll see infants playing, teenagers flirting, families enjoying themselves and old people just taking a walk. It’s open to the sea, but swimming is usually safe and lifeguards are vigilant.

Many tourists have never discovered the beaches of Playa Honda, but they are among some of the largest and cleanest on the island. Playa Guacimeta, the long beach that separates the airport from the sea, leads into Playa Honda itself – a well-kept town beach. Further around the headland is Playa de la Concha, a hidden gem.

Perhaps the most photographed and famous beach on Lanzarote, Papagayo is actually a sequence of several beaches and coves. It’s the only beach you have to pay to access by vehicle – €3 (free for residents), there are no facilities, and it can get crowded on weekends and holidays, but it’s stunning.

Playa de Famara is the other picture postcard star – a long strand overlooked by dramatic and rugged cliffs. It’s regularly mentioned as people’s favourite place on the island, and the atmosphere is unique – sporty, but also mystical. Although you’ll see surfers, bodyboarders and kitesurfers doing their thing here, bathing is not recommended.

Probably the most blindingly white beach on the island, with coarse coral sand, this miraculousbeach just south of Órzola is on the edge of a large shallow lagoon that quickly warms up in the sun. It’s perfect for kids, but get there early, as it can get very popular.

If you don’t have a boat, hiking down the Famara cliff is the only way to get to one of the most isolated beaches on the island. The sand is perfect, although there’s often a lot of flotsam washed up on the north coasts. Strong currents mean that even experienced swimmers should take immense care here.

One of a number of wild beaches on La Graciosa, this cove is sheltered by the cinder toffee – coloured Montaña Amarilla. Only accessible on foot, its sheltered location makes it probably the safest bathing beach on the island.

A stunning stretch of black sand that separates the saltworks from the ocean, the beach at Janubio is all sea, sky, surf and sand. It can be a magical experience, but don’t even think about bathing here.