La Casa de Las Estrellas lies in the arid, desert region to the north of Costa Teguise, overlooked by Montaña Tinaguache. It’s a peaceful place, where hubara bustards’ nest and kestrels hover silently in the wind, and its name comes from the immense canopy of stars that cover the plain at night. 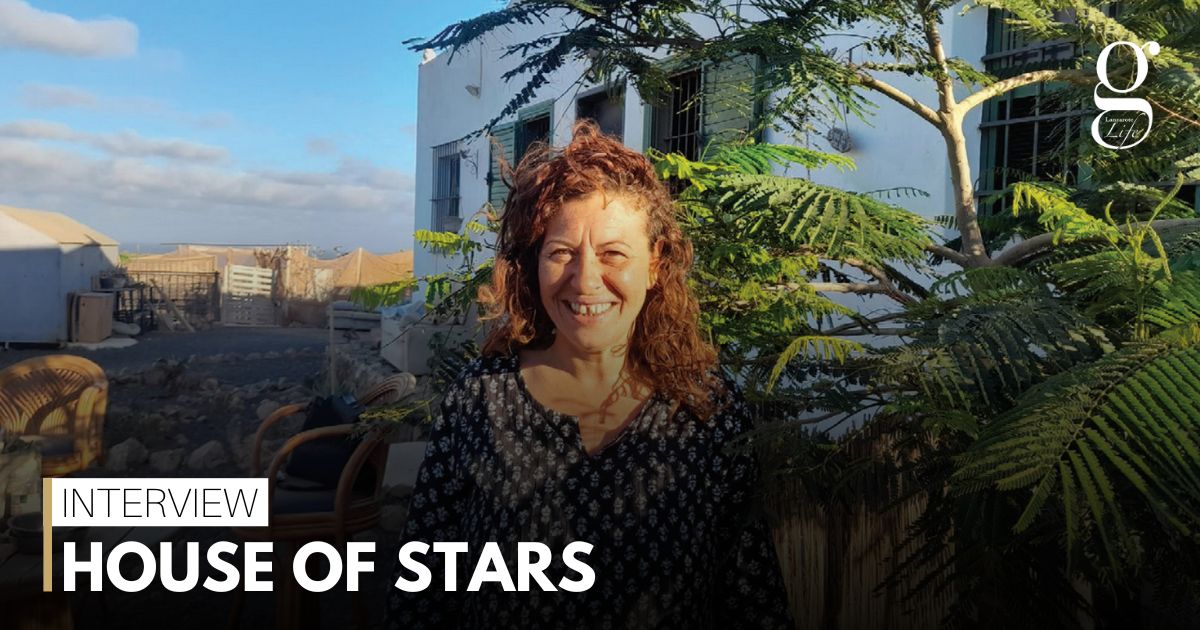 As I arrive, several dogs rush to the gate to greet us, milling around excitedly. “That one looks like a sheep” I say, pointing to a woolly-coated dog. “It is a sheep,” says Liala Miliardi, “But Maya spends all her time with dogs and thinks she is one.”

Liala has lived at the Casa for two years. “It all came about by accident,” she says. “My original plan was to hire it out for holiday rentals, but then I started rescuing animals.” She carried on rescuing them, and is now in charge of fifteen dogs, a small herd of goats, two donkeys, cats, ducks, chickens, guinea pigs, rabbits, a parrot, and an attention-seeking goose called Napoleon.

Located 15 minutes down a rough, dirt track, the house has no mains electricity nor running water. A solar panel provides energy while a truck delivers water each week. Liala works with volunteers who donate their time for food and lodging and makes a little money with goat treks – heading out into the wilds with some of the goats at the Casa.

Liala has lost count of the total amount of animals at the Casa, but she knows all their names down to the tiniest quail chick. They come from all sorts of backgrounds – many of the dogs were waiting to be euthanised in Gran Canaria, other animals have been found by tourists or taken from abusive owners. The donkeys Nelo and Nela are a good example – the eight-year-old male rescued from an alcoholic owner who beat him daily; the elderly 32-year-old female seeing out her days calmly after a lifetime of neglect and malnutrition.

Liala has also raised several abandoned baby animals herself. Maya the sheep was one, and she lovingly feeds a ferret from a milk bottle while we visit. All animals are neutered to avoid further breeding and given the necessary vaccines.

This means that vet’s costs are one of Liala’s main outgoings, as well as the food for dozens of creatures. She currently receives no help from the authorities and survives on donations from supporters and is happy to accept anything “Money, food, cleaning products, anything that could be useful.”

Liala works closely with other animal associations on the island, but the Casa de las Estrellas is a full-time job. When I ask about her plans for the future of the sanctuary, she laughs “I never make plans,” she says. For now, this unique sanctuary is a refuge, a place where humans and animals can find a little peace under the stars.

Working toward a better Tías
33 dead and missing