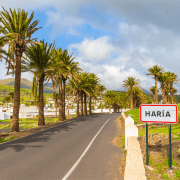 Haría has reduced the minimum size of a parcel of land to be eligible for construction from 1,000 square metres to 500 square metres, in order to make it easier to build new homes in the municipality.

The amendment to the municipal plan will permit at least 50 houses to be constructed.

Mayor Alfred Villalba said “We‘re talking about a work of great importance that will make it easier for young people to live in the municipality and will be another step forward in the battle against depopulation that we‘re facing.”

Although the municipality of Haría has increased its population to 5,123, the inland towns of Haría and Máguez have seen a steady decline in population this century. Haría itself has lost 200 residents in 20 years, with just 964 remaining in the town today, while the coastal holiday town of Punta Mujeres took over from Haría as the municipality‘s most-populated town around ten years ago.

Covid-19 and Autism
Scroll to top