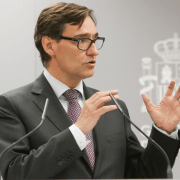 Children will be allowed to leave the home for short walks from this Sunday, the Spanish government confirmed yesterday after being forced to perform an embarrassing U-turn.

Following several days of speculation on how lockdown measures would be relaxed after April 26th, the government’s spokesperson, María Jesús Montero, yesterday announced that children up to the age of 14 would only be able to leave the home under adult supervision to carry out permitted activities such as shopping for food or going to the chemist. Simply leaving the house for a short walk would not be permitted.

The announcement brought a  storm of criticism from opposition parties and health experts, with reports of a heated confrontation between Pablo Iglesias, leader of the Socialist Party’s coalition partners, Unidas Podemos, and the health minister Salvador Illa. Most critics pointed out that, instead of reducing risk, supermarkets and shops are precisely the places where children are most likely to contact or spread the virus.

Finally, in the early evening, Salvador Illa held a press conference in which he confirmed that children would be able to “go for walks” starting this Sunday.  However, precise details of the new rules will not be released until the weekend.

This morning, Spanish President Pedro Sánchez insisted that “This is a government that listens. We propose to  allow children to accompany adults to carry out essential tasks, and also to take walks.” Requesting the approval of congress for a third extension of the state of alarm, Sánchez also stressed that the exit from the lockdown would be “slow and gradual”. “We must act with extreme prudence,” he said.

There is a simple reason for Spain’s caution in relaxing lockdown measures: with an official total of over 21,000 deaths, the country is the third-worst affected in the world and Pedro Sánchez’s precarious coalition government desperately fears being accused of allowing a second wave of infections.

Meanwhile, on Lanzarote, two new cases of COVID 19 have been registered in the last 24 hours. Both are workers in the same old people’s home on the island.

The Calima returns
Exercise on the agenda

Signs of improvement in a transformed world
Scroll to top