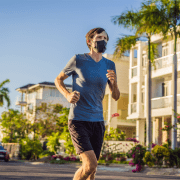 Individual outdoor sports are likely to be permitted at some point in the first half of May, according to Spanish government sources. Meanwhile, the Canarian Government will suggest that exercise should be allowed from 6am to 9am in the morning.

Fernando Simón, the director of the Spanish Ministry of Health’s Emergency Co-ordination Centre, has said that proposals to authorise sport  are  “reasonable” and are “on the table” as one of the measures that he and Health Minister Salvador Illa are considering for the next phase of the lockdown.

The type of sports allowed will be strictly limited to those practiced individually, such as jogging or cycling. Team sports, group training activities and any sports involving contact will remain forbidden. No mention has been made of swimming, although this will require clarification in the Canaries, where a number of sea swimmers have already been arrested and fined.

Runners will be expected to observe social distancing measures (although Fernando Simón made it quite clear that doing so would not be an excuse for pairs or groups to run together), and it is likely that mask use will be obligatory, too.

The Spanish government are still studying how to implement the conditions. One of the reasons for the ban on exercise is the fear of a mass exodus of people who suddenly start to crowd pavements, parks and seaside promenades, increasing the risk of contagion. They are also aware that the rule may seem unfair to mainly older people who don’t practice sport but walk for exercise.

Lluis Serra, the spokesman for the Canarian Government’s emergency Committee, has suggested that a fixed timetable should be established for exercise on the Canaries. He recommends allowing people out to exercise between the hours of 6 am and 9am in the morning, in line with the strict time restrictions adopted in other parts of Europe.

After weeks of unreliable supplies and fluctuating prices, face masks are now available at the majority of  farmacias (chemists shops) on a rationed basis.

The masks are of the surgical type, and the Las Palmas College of Pharmacists has recommended that the upper price limit for each mask is 95 cents. To obtain a mask, you’ll need to show your health card, and only one mask can be bought every three days. Both these measures are intended to stop hoarding and maintain stocks.

The Spanish government and regional authorities will fix prices for gloves and hand-washing gels today.