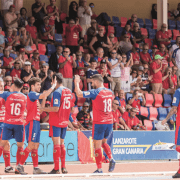 Our football correspondent, Ian Lane, wrote this report in the early days of the lockdown. However, any further football this season – from UD Lanzarote or anyone else – now seems unlikely.

Only two matches have been played since my last update, with the Rojillos winning one and drawing the other. This leaves Lanzarote in 15th spot and six points clear of the relegation positions in Spain’s Tercera División (Fourth Tier).

Strangely enough the match on the 23rd February was also suspended but it had nothing to do with the coronavirus. Instead, the Canary Isles were under siege from a blanket of sand and dust from a calima (sand storm) coming in from the Sahara.

The Rojillos form of late has improved, with the side unbeaten in their last five matches and looking like a team that has grown in confidence.

This update was written mid-March so in a world that has changed drastically it is impossible to know if the football season will continue.

And even if the season does continue, the players will need time to regain fitness. The club has given each player a fitness program to follow, but running is out of the question with the current lockdown.