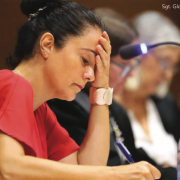 One of the most worrying cases on Lanzarote has come to an end with the acquittal of the Guardia Civil officer Sergeant Gloria Moreno in a Las Palmas court. The court cleared Sgt Moreno of charges of falsification of documents and slander.

This shocking story begins in February 2015, when Sgt Moreno authorised a raid on a group of businessmen, retired police officers and other influential Canarian men who were taking part in their annual pardela roast on the uninhabited isle of Alegranza. This highly illegal practice, which involve taking shearwater chicks from their nests, then plucking and roasting them, is seen as a tradition among certain islanders, and dates back to past times when seabirds were an important element of the meagre Canarian diet.

The raid caught several men red-handed, ten of whom were fined over €8,000 each in May this year. However, it also set in place events that had every appearance of a witch hunt against the Sergeant.

Immediately after the raid Sgt Moreno was suspended by a Guardia Civil superior officer in Las Palmas, after a complaint appeared in which Arrecife’s municipal vet accused her of harassment. The suspension was summary, with no hearing or appeal before it took effect.

Sgt Moreno was also accused of falsification and slander after she presented an internal report against one of her Guardia Civil colleagues, who she suspected of informing the seabird hunters of the raid in advance.

One by one, however, all the cases and suits against the sergeant have collapsed or been dismissed, and unless appeals reverse the recent verdict, she is currently innocent of every charge that has been brought against her.