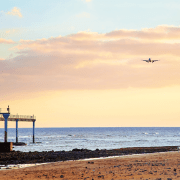 The UK Government will review its list of travel corridors on Monday, and the idea of regional air bridges may provide hope for prospective holidaymakers and relatively safe tourist areas of Spain that have been affected by crude, national quarantine laws.

The decision by the Norwegian government yesterday to quarantine all arrivals from Spain highlights the heavy-handed nature of national quarantine laws, which have also recently affected many Irish holidaymakers who were planning to visit Lanzarote.

Ireland recently left Spain off its “green list” of countries whose visitors do not need to quarantine on entering the republic. It made this decision because Spain’s rate of new cases in the last 14 days has reached 34.6, far higher than Ireland’s current rate of 5.3 cases per 100,000

However, the current rate of new cases on the Canaries is 5.8, just a little higher than Ireland’s, and at least half of that figure is composed of cases among migrants who have been intercepted and quarantined. The Canaries are every bit as safe as Ireland, and Lanzarote is considerably safer.

Portugal is eagerly awaiting good news from the British government’s review on Monday. Quarantine requirements still apply to anyone arriving in the UK from Portugal, despite the fact that the main tourist areas such as the Algarve and Madeira are far less affected than urban centres such as Lisbon.

There’s no doubt that the current spate of outbreaks in mainland Spain are cause for concern, but the lockdown already showed us how the regions can suffer for the performance of the country as a whole. In March and April, while the coronavirus raged in Madrid, Valencia and Barcelona, Canarian cases were far fewer and generally confined to the two main islands. La Graciosa, which has never reported a case, locked down with the rest of Spain while Guardia Civil helicopters ensured the islanders weren’t breaking the rules.

One  problem with quarantine rules is that they are often easily circumvented. The British Prime Minister’s father, Stanley Johnson, recently avoided Greek quarantine restrictions on visitors from Britain by flying to Bulgaria first. Meanwhile, all Scotland could do to try and prevent visitors from Spain not to ignore its quarantine regulations by travelling there via England was to ask them nicely. Scotland lifted its quarantine requirements on Spanish arrivals last week.

It would also be theoretically possible for travellers from restricted areas of Spain to take advantage of a regional air bridge by flying via the Canaries to avoid quarantine in the UK. However, the time, distance and expense would make this far less likely.