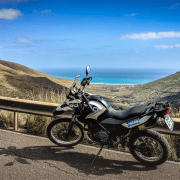 Spain’s Traffic Department (DGT) has issued a special warning to motorcyclists to take extra care following the exit from the lockdown, after an unprecedented rise in fatal accident involving motorcycles.

34 motorcyclists died in Spain between January 1st and 14th March, two more than in the same period last year. The lockdown saw an immense reduction in traffic and only six deaths from March to mid-May, compared to 57 in 2019.

12 have died since May 18th, however, and the Traffic Department have warned that it may be due to carelessness. “Half of the deaths have resulted from motorbikes leaving the road,” said spokesman Álvaro Gómez, “and these type of accidents are usually associated with distraction and excess speed.”

Could regional air bridges save tourism?
Scroll to top