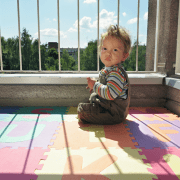 Spain’s Health Ministry has commissioned a working group to report on the possibilities of releasing lockdown restrictions on children, in response to increasing concerns about the physical and psychological effects of long-term confinement.

Throughout Spain, painted rainbows can be seen hanging from thousands of balconies. Created by children, they bear messages of gratitude to health workers and expressions of hope such as “Everything’s going to be fine”.

But this bright optimism hides the fact that this is a frightening time for many children, and that they are one of the groups most restricted by the lockdown, unable to leave the house for exercise, shopping or work. Although they are, thankfully, less likely to be affected by the virus itself, pediatricians increasingly fear that the results of the lockdown could be stress, anxiety and obesity.

Education is another problem. Since the schools closed, over 8 million children are supposed to be studying at home, but many households don’t have a computer, or have to share one with the rest of the family. As a result, many have stopped studying.

The closure of schools and nurseries, combined with the lockdown, has also placed child care duties entirely within the home, and the stress has already been registered in households where single parents find themselves barely able to leave the house, as well as in larger families living in small apartments.

Elsewhere in Europe, children are luckier. France and Germany’s restrictions permit children to leave the home, and Italy relaxed its restriction on children earlier this month. In Spain, advocates of letting children out are proposing a similar relaxation to the Italian measure – allowing children out to walk near their homes for an hour each day. “At the moment dogs have more rights than children,” said one parent activist. Others have complained “It seems we’re more worried about reopening bars and restaurants than letting kids outside.”

Several leaders of Spanish regional governments have asked the national government about relaxing the lockdown for children, and Canarian Government adviser Lluis Serra has also supported the measure, pointing out that children require vitamin D from sunshine.

However, the Spanish Minister of Health, Salvador Illa, recently said “We must act with maximum caution and, right now, although we are aware of the sacrifice involved, we will uphold this measure.”

Nevertheless. the setting up of the working group, combined with statements by other members of the government, suggest that the government may be privately, if not publicly, contemplating a change after April 26th.

Canaries “will not be used as testing ground”
Scroll to top