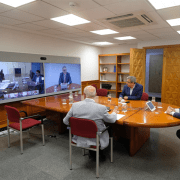 The Canarian Government has rejected the idea of the islands being used as a testing ground for experiments in lifting the lockdown.

The statement followed a news report which claimed that the Spanish government was considering lifting some of the restrictions on the islands next week, before the end of the extension period that is due to expire on 26th April.

The report, which appeared in the online news site OK Diario yesterday and was widely shared on the islands, claimed to have seen a government document in which the Canaries would be used as a testing ground for ending the lockdown, starting with measures such as allowing people out of the home for exercise and sport, and letting children out of the house. Decisions would then be taken for the whole of Spain based on the results.

The Spanish government has not confirmed the existence of the report, but the Emergency Health Committee that advises the Canarian government rejected the idea yesterday, saying “Accelerating the end of the lockdown can only be done with agreement between central and regional administrations, and will never be imposed unilaterally.”

The committee stressed that decisions would not be taken without taking into account the maximum health safeguards and clarified that the lockdown on the islands will remain in place until 26th April at least.

Next Wednesday, Spanish president Pedro Sánchez will seek an extension of the State of Alarm until 10th May, although it has not yet been confirmed whether restrictions will be lifted.

Meanwhile, preliminary results of a joint study by the Carlos III Health Institute in Madrid and Spanish State Meteorological Agency indicate that high temperatures could be among the reasons why the Canaries appear to have suffered less from coronavirus than the rest of Spain.

The study supports other global research linking COVID 19 transmission  to lower temperatures, and shows that the Canaries, with an average temperature of over 15 degrees Celsius, has the lowest incidence of COVID 19 per 100,000 residents in Spain. The most heavily affected areas in Spain all had average temperatures below 10 degrees during the period of analysis.

The encouraging figures in the Canaries continued yesterday, with just 17 new cases confirmed, none of them on Lanzarote. Two further deaths occurred on the islands, while the amount of patients who have recovered from COVID 19 and been discharged is now 622.