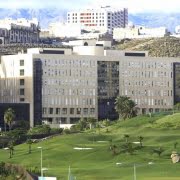 The Canarian Health Service now has the equipment and experience to carry out life-saving heart transplants, and has already successfully performed two operations.

In the last two months, the Hospital Doctor Negrín in Las Palmas de Gran Canaria has carried out the first and second ever heart transplants to take place in the Canaries. The first recipient has already been discharged from hospital.

The operations are the culmination of a long-held dream of medical professionals on the islands. For years, neither of the two main hospitals on the two largest islands of Gran Canaria or Tenerife were authorised to carry out heart transplants by Spain’s National Transplant Organisation (ONT).

That changed last January, when the ONT finally gave the green light to the Hospital Negrín to perform heart transplants. But before it could do so, the Canarian Health Service set up a Cardiac Transplant Unit to undergo the months of training and preparation that were necessary before the first operation could take place.

The Canarian Health Service says that for decades, between 12 to 15 patients were sent to mainland Spain for heart transplant operations each year. From now on, these patients will wait at their homes in the Canaries until a donor organ is available, then be flown to Las Palmas for their operation.

The first transplant took place on 5th December, when a heart became available for a 63-year-old man. That man is now recovering after being discharged, and the cardiac transplant unit carried out a second operation on the 17th January, this time on a patient in his 50s who received a heart from the victim of a fatal car accident in Tenerife.

A hemodynamic unit is being established on Lanzarote which will reduce the need for heart patients to be relocated to Las Palmas. The unit, led by surgeons Edmundo Elvira and Frank Fernández, will allow cardiac monitoring, as well as minimally invasive procedures such as the insertion of stents.

This is just one of the exciting projects at the hospital, which also include the construction of a radiotherapy bunker for cancer patients. After demonstrations and broken promises, the bunker is likely to commence this year.

Emergency calls from the wild
Ganjarote for allover health

A Government at last
Scroll to top