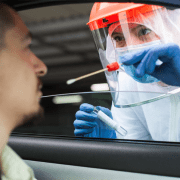 Lanzarote has recently become one of Spain’s “hot spots” for coronavirus infection, but the second wave on the island offers far more cause for optimism on heath grounds than the first one.

A worrying week for Lanzarote ended with a total of 533 active cases on the island, with more than half of them being detected in the last seven days.  Thursday’s total of 54 cases was the second highest daily tally since the start of the crisis, and on Friday the island was running at a rate of 183 cases per 100,000 people over the last 7 days.

And yet, despite the shocking figures, there are also statistics that offer a little hope and relief. One of them is the amount of people in intensive care – just one at the moment, while there were eight in late March. During the first wave, six people died of coronavirus on Lanzarote, and there has been just one death since.

Pressure on health services was behind the decision to impose a lockdown in March, and that pressure is still lower than it was during the first wave. A second lockdown has never been entirely ruled out, but the chances of it happening on a national level remain extremely remote. Lockdown measures are now more likely to be introduced on a local level as and when needed.

On Lanzarote, the vast majority of cases are mild or asymptomatic, and 523 of the 537 active cases on the island are in quarantine at home. 204 islanders have recovered from the coronavirus so far this year, but that figure is sure to rise rapidly over the coming weeks.

Arrecife is the municipality with by far the highest amount of active cases, at 499. While the capital’s figures include tourists and non-residents, as well as the population of Playa Honda, Cabildo president María Dolores Corujo last week confirmed that the main centres of infection in the city were the barrios of Valterra and Titerroy. She stated that the main outbreaks have arisen from nightlife, family meetings and religious gatherings.

Elsewhere, Tías has 16 cases, Yaiza 8, Teguise, San Bartolome 6, Teguise 5, Tinajo 3, and Haría is technically Covid-free at the moment.  These figures are still too high for comfort when expressed as cases per 100,000 people (the measurement that is used by health experts), but they’re also low when you consider that 0.07%, or one in every 1,260 people, is currently suffering from the virus in Tías.

Increased testing is undoubtedly one of the reasons behind the increase in cases on Lanzarote. It is now accepted that the majority of mild cases went undetected during the first wave, but tracking and testing now means that authorities detect mild or asymptomatic cases regularly.

Lanzarote carried out 2,251 PCR tests in July and more than doubled that figure to 5,756 in August.
The Canarian government plans to increase the amount of testing further in September in order to locate, identify and control, the virus as a means to bring it under control again.

However, on Lanzarote, as the economic and social effects of the pandemic continue to multiply, it is becoming increasingly evident that this is more than a health crisis.

SARA Dog of the Month: Rama
Scroll to top