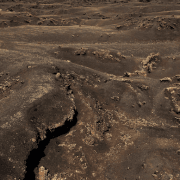 A 73-year old woman was evacuated from Montaña Corona by helicopter after suffering from a fall last month.

The ascent from Ye to the lip of the crater of the Volcán de Corona is a short and popular walk, but one where the terrain gets progressively rougher. Last year a 77-year old man was evacuated by emergency services after falling on the path, and five more tourists had to be rescued from inside the crater after attempting this tricky descent. On this occasion, however, the ground was so rough that the GES (Grupo de Emergencias y Salvamiento) helicopter had to be deployed from Arrecife’s fire station.

New toilets for Terminal 2
Electricity and aviation responsible for 75% of Lanzarote’s oil consu...