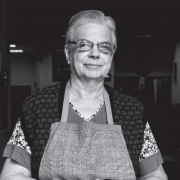 At the time of writing, 88 people have tested positive for coronavirus on Lanzarote since the virus arrived in March, and only three cases remain. Meanwhile, over 5,000 have lost their jobs and 19,000 have been furloughed on a reduced income which has often been delayed for months. Currently, the real crisis on Lanzarote is not a virus; it´s poverty.

Sor Ana Rodríguez is at the sharp end of this appalling situation. The founder of the Arrecife-based charity for the homeless, Calor y Café, says she has been “overwhelmed” by the situation. Nevertheless, she’s still there every day, as she has been for more than 20 years, and she’s still making a difference.

We visited Calor y Café last month to find Sor Ana overseeing several of the homeless men who drop into the centre every day as they organised shopping trolleys full of supplies for the desperate families who come to the centre in the afternoon.

The list of families makes sad reading: “2 adults with 3 children”, says one entry, and she explains that this family share two rooms with another single parent family – “1 woman, 1 girl”. Other extended families may have three generations living under the same small roof. Sor Ana’s list is just one page of several attached to her clipboard.

A group of local Canarian businesses have just donated seven palettes of much-needed supplies, and there’s a lot of work to do organising them. Nevertheless, Sor Ana still found some time to chat with us.

How did the lockdown affect Calor y Café, Sor Ana?

It changed everything. We’ve seen a huge rise in applicants, and we’ve also had to change the way we do things here.

We used to serve food here, but we’re not permitted to now, and so we have to give out takeaway meals to those who want them. We serve them one by one, in Tupperware boxes.

How do you get homeless people to stay home in a lockdown?

The police moved a few people to shelters set up by the Ayuntamiento, but many others live in abandoned buildings or squats, and like everybody else they were only allowed out for emergencies such as food. At first, many were confused and worried and at 9 o’clock in the morning here it was like a pilgrimage.

But this has gone much further than the homeless, hasn’t it?

Lots of people need help. There are those who are unemployed; those whose ERTE payments haven’t arrived; families who have had a high electricity bill because of the lockdown, or have just had a car accident, and need a little help.

We’re helping 10-15 different families a day. They apply to us for help, and I insist they have a certificate that shows they live together, and they’ll get food and other items.

What do you need from supporters?

We always need food – not just perishable food, either – fruit and veg are welcome. We get through more milk than anything. Cleaning products and hygiene items are always welcome. We’re OK for clothes now, I think.

The government has just announced a basic minimum income, and the Canaries are also giving out emergency funds. Will this make a difference?

I think it’ll promote laziness without any consideration being asked in return. All the world is living in debt at the moment. It’s the culture we live in, but it doesn’t help.

They talk of the “new normality” but this is going to take a lot of time to fix. Do you think it’ll ever be normal?

Pretty words are fine, but they don’t change the facts. This is a crisis, and we’re not going to solve it with pretty words. What we need is education, good sense, responsibility and the ability to value what we have.

What about yourself, Sor Ana. Have you been well? Do you get any free time?

There have been times when I thought “I can’t go on”, and it’s true that I still think this situation is unbearable, but I keep coming here at 9 every morning. My free time is on Sunday morning, when I go to mass before coming here again.

How can people help you? Do you need donations of food? Of money? Volunteers?

One thing I’ve learned is that people are generous, and there is a feeling of solidarity here. I welcome any donations of food, cleaning stuff and other items, and financial donations are helpful, too.

Thanks for your time, Sor Ana, and good luck.

Sor Ana was a nurse at the Hospital Insular in Arrecife when she realised the need for Calor y Cafe. At that time, any homeless person who wished to get official help had to prove that they were undergoing treatment for drug addiction or alcoholism. Many slipped through the net.

Sor Ana first opened her dining room in front of the hospital, serving meals to anyone who turned up. She also offered showers and washing facilities. Later, when this building was closed , she relocated to the large warehouse in the industrial park at Arrecife where Calor y Café is still located.

In 24 years she has dealt with a huge rise in the island’s population, the effects of the financial crisis of 2008 and many more setbacks. This , however, could be her biggest challenge yet…