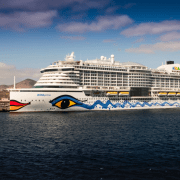 The British Foreign Office has issued advice to its citizens not to book holidays on cruise ships – a decision which adds more uncertainty to the future of  an increasingly popular form of tourism.

At the start of the coronavirus crisis, images of thousands of cruise passengers who were not allowed to disembark from their ships because of outbreaks on board dealt a severe blow to the industry’s reputation. The British announcement is also likely to cause more cancellations on previously booked cruises.

Lanzarote and the Canaries will not be affected immediately – the Canarian cruise season runs during the winter and spring months from October to June – but  it’s still uncertain whether we’ll see the familiar sight of gigantic cruisers such as the Aidanova, Mein Schiff and the British Cunard line cruisers Britannia and Queen Victoria return to Puerto de los Marmoles or the marina at Arrecife., which has invested millions in infrastructure and facilities for the cruise trade.

Meanwhile, cruise operators face massive outlay on preparing cruise ships for the post-coronavirus age. Last week, the EU’s Healthy Gateways project published a set of protocols for cruise ships and destination ports that will form the basis of procedures throughout the continent. It includes testing of crew, attention to common areas shared by passengers and several other measures that are already familiar in the hotel industry, such as the elimination of self-service buffets. The protocols are  intended to guard the safety of passengers and crew safety from the moment of boarding to disembarkation.

Positive signs for the future of the industry include the loyalty of cruise passengers, many of whom return year after year. TUI cruises has said it is “upbeat” about the future, and claims that many passengers have rebooked cancelled cruises, while bookings for next year are also looking healthy.