On days when small waves roll into Lanzarote’s beaches, it’s common to see tourists trying a bit of bodysurfing. But surely no one would consider doing it on notorious, awe-inspiring waves such as El Quemao at La Santa. No one, that is, apart from expert bodysurfer Ahmed Erraji – also known as El Hijo del Mar (Son of the Sea). 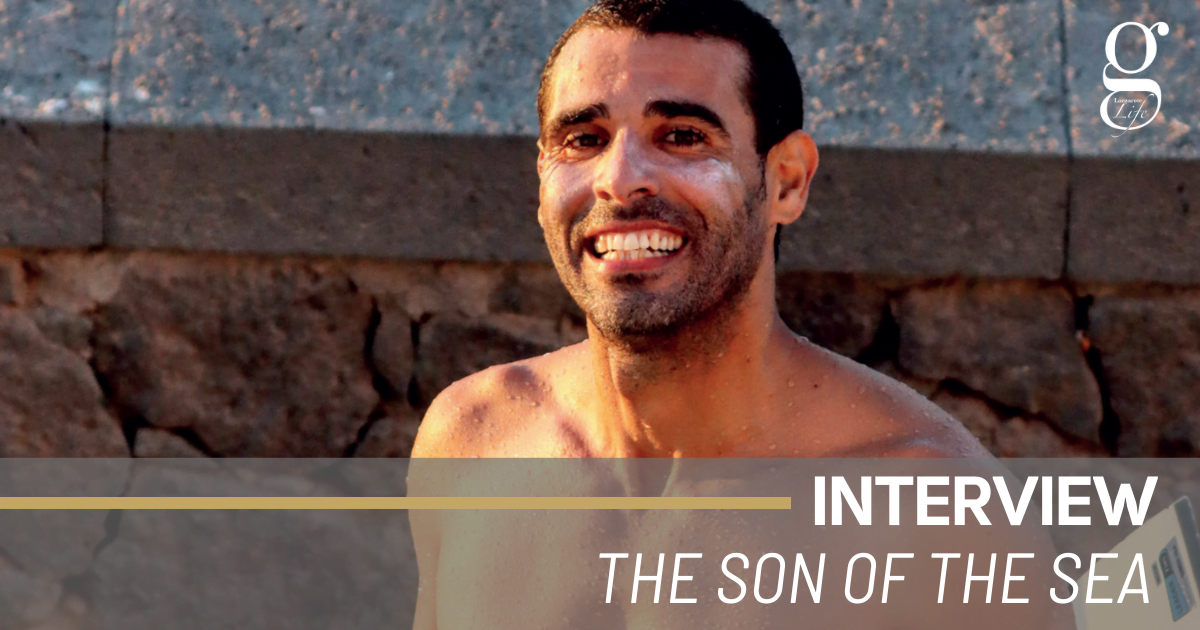 Ahmed, how did you get the name “Son of the Sea”?

That was a name given to me by my grandmother, Arabia, when I was just five years old. One day my uncle took me out with some friends. We were crossing a bridge and someone said there was an octopus in the water. I climbed up to look, and my uncle pushed me in, then jumped in after me. I couldn’t swim but I doggy-paddled, crying, while he said “Come on, Ahmed.” I was angry with him, but the next day I went back and did it again.

When did you start body-surfing?

Not much later afterwards. I’ve been doing it since I was seven years old, and started on the beaches of my hometown of Rabat, in Morocco.

Do you ever use a surfboard or body-board?

No, I only ever surf with my body. Bodysurfing is an elusive activity that a lot of people don’t know about because very little information is available about it. However, most people who love the ocean at least know how to do it, and understand the importance of it. For them, it may just be a pleasurable activity. But there is something mystical about it, too.

Bodysurfing is arguably the best way to connect with the ocean’s power, simply because there is nothing that separates the surfer from the waves.

What is the biggest danger?

The wave itself. No one really has a clue as to how waves will behave in their most extreme forms.

What is the riskiest situation you’ve been in?

The spots here are super intimidating, and often provide a big reality check. Rip currents, slabs, rocks, and difficult access all add up to make it difficult. You can spend a lot of energy just swimming one mile to the peak while battling the elements. One of the riskiest situations that I remember is, during a red weather alert, jumping from the harbour while next to me there was a big, powerful whirlpool. By luck or skill or grace I resurfaced.

Why do you do it?

Because I’ve never had a bad time while I’m bodysurfing. For me it’s a sport that’s more gladiatorial than athletic.

Do you have a special fitness regime or diet?

A plant-based diet is the basis of my health. As regards fitness, I do most of my training in the water, swimming or free-diving with a monofin.

Are there any preparations for a bodysurfing session?

For some years now I’ve been calling the police before a session. Sometimes people who don’t know what I do see a red dot in the water and think that I’ve lost my board or that I’m in trouble, and they call the emergency services. So, I call ahead, tell them where and when I’m bodysurfing and what colour lycra I’ll be wearing. That way I can avoid being “rescued” and wasting time and resources.

What do you love about Lanzarote, Ahmed?

Lanzarote is a box of surprises. This island has always been compared to the moon or Mars. Once you have been stricken with the nature bug, it’s impossible to stay at home! In my case, I have been hypnotized by La Santa village and its big waves.

What do other surfers think of what you do?

I think they have the same thinking as me. Here in La Santa there are times when there’s a big swell and we get together in an outer reef line up. This is a place that we all regard with reverence: light, water, volcanoes and motion all add up to something transcendent.

It’s an exquisite suspension of all things mundane, in which nothing matters but living in that particular instant. Some people spend years meditating to capture this feeling. Others take psychedelic drugs. For me, a brief, exhilarating ride on a mountain of water does the trick.