Gloria Moreno meets us in a teleclub in Tiagua, a village that overlooks El Jable, the sandy desert area that is one of the most important wildlife zones on Lanzarote. She’s speaking to us today in a personal capacity, outside of her professional role as an officer in the Guardia Civil’s wildlife department, Seprona, and she’s full of ideas to improve the island she loves. 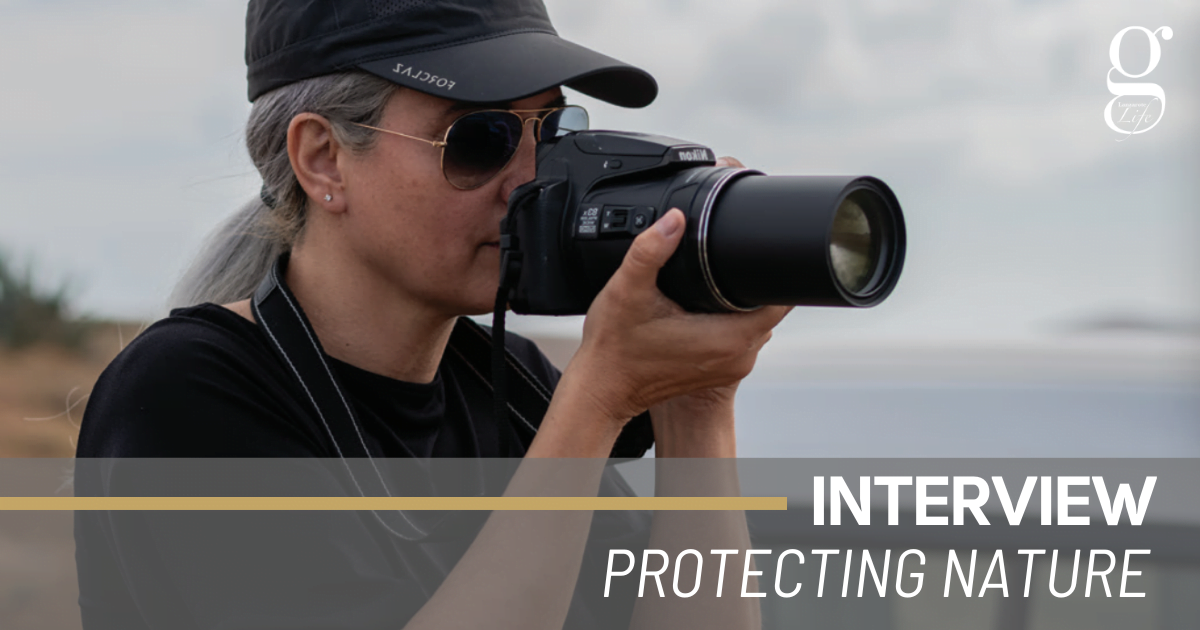 We arranged to meet Gloria Moreno after seeing a video in which she outlined her plans for cat control on Lanzarote. It’s a tricky issue, with ecologists asking for cats to be controlled to protect native species, while animal associations fear the type of control that may be applied.

Is there friction between ecological associations and animal protection groups on the subject of cat control?

There is a little right now, yes. The problem is that we have an overpopulation of cats, and 20 years of sterilization projects have failed to deal with this. Ultimately, it derives from human mistreatment – the abandonment of cats – but colonies of cats will expand when numbers increase, and that is when there is an impact on local species, such as small birds.

Is there evidence that cats prey on these species?

That’s a good question. We need to have firm evidence, and while there are confirmed cases of 30 pardelas (shearwaters) being hunted by humans, there is no firm evidence that cats have done so. It’s possible, but when you find the body of a bird, you can’t determine which animal was responsible without DNA tests. It could easily be rats.

What solution do you propose?

We need to start at the origin, and that means humans. I believe that there should be a massive campaign to sterilize all domestic cats. But that won’t work by placing the responsibility on citizens, as is currently the case, because there’ll always be someone who finds an excuse, such as “my one cat won’t make a difference” or “I can’t afford it”.

The authorities need to apply it to all cats, except perhaps very old ones, and to do so they’ll need a census. Currently, I think only Teguise, San Bartolomé and Haría require cats to be identified.

Can you comment on recent reports that a proposed Canarian law will permit cats to be hunted?

This has arisen because feral cats are classed as “feral domestic animals” and lie outside of the animal protection laws that apply to domestic pets. That means they could be hunted in certain areas, and hunters who claim that they prey on rabbits or other species classed as game may well do so.

It’s not always possible to distinguish a domestic pet from a feral cat, nd the law currently does not make that distinction. I would suggest that, at the least, hunters should bear the burden of proof that a cat is feral.

Are there other threatened species on Lanzarote?

All of them are threatened. The threat will disappear when humans do. They are threatened by expansion of towns, by agriculture, by pollution and many other environmental factors. Here in El Jable, for example, you can often hear rallies taking place in a zone that is vitally important for birds such as the Hubara bustard.

What would you advise anyone who is worried by animal mistreatment or environmental crimes to do?

Submit a written denuncia. That’s the only way it can be guaranteed to be investigated – a phone call is not sufficient. That’s one reason I welcome the arrival of the Ademal association, which takes on the costs of denouncing offences against animals – and those costs are not just financial – there can be personal reprisals, too.

Are dogfights still a problem here?

They are illegal, of course, and I haven’t heard any reports on Lanzarote in recent years, although I’m aware they still take place on Tenerife and Gran Canaria.

That’s another matter. This is still happening here, and is protected by law. The national law banned it, but an exception was made in the Canarian regional law as it was “traditional”. I think that’s shocking, no one would allow regional exceptions to the law against sexual abuse because of local traditions, for example. The thinking in 1991, when the exception was made, was that cockfighting would die out naturally, but 30 years on it’s still happening. I’ve seen one – it was horrible.

Do you have any personal projects you’d like to see carried out?

I’m full of ideas to improve Lanzarote. I don’t see why we’re not making more use of solar power, for example, and I’m currently keeping an eye on excavations of sand here in El Jable. They might say “The crazy woman is here with her camera”, but that’s exactly what I want them to think.

What are your favourite parts of Lanzarote?

I love Mirador del Río, the Salinas de Janubio and the Cueva de los Naturalistas. I’ve also had the privilege to scuba dive in the Túnel de la Atlántida, which was spectacular.

Thanks, Gloria, and good luck.

Madrid goes to the polls
Scroll to top