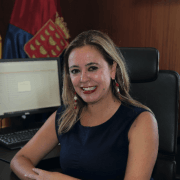 Last June, María Dolores Corujo , known as Loli to friends, became the most powerful woman on Lanzarote when she was elected as President of the island’s government, the Cabildo, ending almost 10 years of rule by the Coalición Canaria.

At 43 years, Corujo has already been a Mayor, a deputy in the Canarian government and the secretary of her party on Lanzarote. The next four years is likely to see this shooting star of Lanzarote’s politics burn even brighter.

You won the elections in May by fewer than 200 votes and have ended up in a pact with the PP, who are not what one might call traditional partners of the Socialists? How much stability can we expect from this government?

The Socialists and the PP agree on one fundamental thing: that the situation in which the island has been mired in for the last ten years could not continue. The pact has been drawn up to last for four years and its stability is guaranteed, looking at the excellent results that we’re already achieving thanks to co-operation, understanding and dialogue. In any case, we’re talking about a constant theme that has been repeated throughout the Canary Islands and which arises from the weariness with and rejection of the Coalición Canaria.

There are currently Socialist presidents in Madrid (almost), in the Canarian Government and in Lanzarote’s Cabildo. Does this mean that it will be easier to put the policies of your government into practice?

What it means is that the citizens of Lanzarote, of the Canaries and of wider Spain have put their faith in the project of the Socialist Party. It’s a project of solidarity, in which there’s room for everybody and which will, of course, not only improve the circumstances of this government, but also those of all citizens.

What are the most important projects of this four-year term?

We’ve made a commitment that this will be the legislature of the people. Housing, poverty and care of the aged are issues that have not received a minute of attention in the last few years.

We also have to regain the time that has been lost in the development of tools for control and management of the island’s territory. Finally, we’re going to throw ourselves into a determined fight against climate change. And we’re going to do all this in a new climate of transparency and respect towards the people who work in the institution of the Cabildo.

What are the greatest challenges that you and your team face in the years to come?

To make advances in equality; to reduce the levels of exclusion on our island and to respond on an island-wide basis to the greatest challenge we face as a species – climate change.

Politics on Lanzarote has been tainted by corruption in recent years. What measures exist to combat it?

Transparency, accountability and the reporting of irregularities. When things are done in plain view, so everybody can see, there is less space for corruption to hide. It’s also vital to update all procedures and decision-making processes so that all of them – absolutely all – are done in accordance with the law.

Climate change is a very important issue for Lanzarote. What objectives exist and how will they be met?

Climate change is the most important challenge we face as a species and Lanzarote, as an island and as a Biosphere Reserve, is especially threatened by it. The priority is to continue the tradition of co- existence with nature that characterises us as a society. At the Cabildo, we have to improve the management of waste and continue to promote renewable energies. We’ll do this hand in hand with the Canarian Government, which is currently working on a comprehensive law aimed at energy transition.

The removal of Jason de Caires’ horse sculptures from the sea below the International Museum of Contemporary Art in Arrecife has been criticised by many. Can you explain why the Cabildo took this decision?

This was a political decision taken in response to the political decision of placing them there in the first place. While I won’t raise any questions about the artists’ work, what’s true is that this installation was always intended to be temporary, just as it was only displayed in London for a period of one month.

What then happened was that someone decided to leave the sculptures there for a longer period and raised the possibility of a final sale for €200,000.

In any case, I believe that Lanzarote should host artworks which are conceived for Lanzarote, which place value on our public spaces, and which do not use Lanzarote, and a special location such as the International Museum of Contemporary Art as a promotional platform.

What importance does the foreign community have for the economy and culture of Lanzarote?

Lots. After years of isolation. Lanzarote is now a meeting place. And the more diverse we are, the richer we become, both materially and culturally. Sometimes it’s the viewpoint of an outsider that can best help you to see and understand yourself. It’s impossible to understand the Lanzarote of today without taking into account the contribution of tens of thousands of people who have transformed themselves into the new lanzaroteños.

You’ve already been a Canarian MP, the Mayor of San Bartolomé and the General Secretary of your party on Lanzarote. Did you always have political ambitions?

I came into politics because of my beliefs, but the public positions I’ve occupied have arisen because of a series of accidents or coincidences. I’ve never pursued any position, but I’ve always been willing to accept the challenges that my colleagues have proposed. The people who have accompanied me over these years will know how reluctant I am to take on certain posts, but also how I’ll give everything I’ve got when I do.

Politics is just one small corner of something much greater, and the same rules apply in that corner as they do everywhere else. There is inequality in politics just as there is in business, in universities or in families. Full, effective equality between women and men remains an absolutely indispensable aspiration.

Virtual circuit of Lanzarote
Run For Their Lives