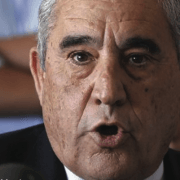 The bulldozers rumbled into Yaiza just before Christmas as workers arrived to carry out the sentence of demolition on various buildings that had been constructed illegally by Dimas Martín.

Martín was ruled to have built bedrooms and a swimming pool onto an existing property that was located in the Timanfaya National Park. Initially, he was ordered to pay for the demolition work himself, but when this did not happen, a private company was hired at a cost of €51,000 to return the property to its previous state. This bill will be presented to Martín, who is currently serving a prison sentence for this offence.

“Sr. Martín thought it would be nice to have a swimming pool to dive into, where he could swim freely on protected land, but he has ended up splashing around in a puddle of delinquency,” said Javier Ródenas, the prosecutor at the judgement.

Illegal properties are rarely knocked down on Lanzarote, and several officially illegal buildings, including hotels, remain standing. It appears, however, that it has been decided to make a particular example of Sr. Martín – Lanzarote’s dark Godfather figure.

Dimas Martín, 71, is perhaps the most notorious character in recent Lanzarote history. An inspirational, firebrand politician who founded the PIL in the 80s and dominated island politics for several years, serving as Mayor of Teguise, Cabildo President, Deputy in the Canarian Parliament and Senator in Spain’s upper chamber.

However, Martín was sentenced to prison in 1998 after being found guilty of fraud and has spent several years behind bars since, adding falsification, conspiracy to defraud, and misuse of public funds to his list of convictions.

In 2009, he was exposed as one of the central figures in the Union Case, Lanzarote’s largest corruption scandal, and has spent most of the time since then behind bars. His party has been irreparably tainted by its founder’s criminal career, and has more or less ceased to exist.

Nevertheless, the Union Case rumbles on, and Martín and his accomplices may face more time in the big house in Tahiche yet.

Over and Out
Scroll to top