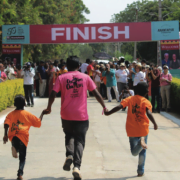 In one of the most desperately poor areas of India, the Anantapur Ultramarathon has now become an annual event, bringing hope, joy and the promise of a future to thousands.

Anantapur is where the Spanish missionary Vicente Ferrer established his Foundation which has spent years changing lives person by person, family by family, village by village.

Vicente Ferrer died in 2009, but his work has been continued under the supervision of his English wife, Anna Ferrer. It is based on the theory of comprehensive development, an all-round approach that seeks to address every aspect of a problem and arrive at a holistic solution.

For example, a school or clinic is built and teachers and nurses are found, but the local villagers understand that it is their task to pay the wages of these professionals themselves. After all, it is their health; their future. The results are independent communities, active societies instead of passive aid recipients.

The Canarian distance runner Juan Manuel Viera founded the Ultramarathon in 2015, with the idea of sponsoring a child for every kilometre he ran. That year he managed to sponsor over 150 children, built three homes and established a support programme for rural women.

Now in its fifth year, the Ultramarathon has grown year after year, with over 200 runners from four nations participating last year. This years run, which will take place from 20th to 27th of January, will extend the scope of the charity work to poorer regions further north. focusing on two villages in a particularly deprived area.

Lanzarote lawyer Mario Izquierdo Lawlor is a regular participant in the Ultramarathon, and will be there again this year. “It’s an incredible experience,” he says. “You’re changing other people’s lives, but you’re transforming your own, as well.”

You can donate, or find out more about the Anantapur Ultramarathon, as well as the good work done by the Vicente Ferrer Foundation, at www.1km1vida.org