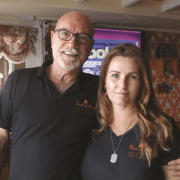 On February 5th, fire broke out at The Good Old Days bar and restaurant on Puerto del Carmen’s Avenida de las Playas. No one was hurt, and it wasn’t the worst fire the resort has seen, but it’s still a huge setback for any business. We chatted to Nolita and Charlie about the experience.

What caused the fire?

Nolita: A faulty fryer. It was 10.30 in the morning and there were a few people here, while Charlie was having his breakfast.

Charlie: It took hold really quickly in the kitchen. We just got everyone out, then I disconnected the electricity and gas, got rid of the pressurised beer barrels and got out, too.

How was the Fire Brigades’s response?

Charlie: They were great. I think the one-way system here in Puerto del Carmen meant that they got here in 20 minutes rather than ten, but that’s not their fault.

Nolita: We called them again ten minutes after the first call and they said they’d be another 10 minutes. It’s not long, but it seems like ages when you’re watching your livelihood burn down.

Nolita: We pay a company for a ceiling fire extinguisher system which is checked regularly. It didn’t work, so we’re not happy about that.

What was the damage?

Charlie: The kitchen was burnt out and the roof has fallen in. Everywhere else was mostly smoke damage. One fireman said the damage was “not bad”, but I don’t think his “not bad “ is the same as ours.

Nolita: The firemen gave us permission to enter soon after they’d put the fire out and we started the clean-up two hours later.

How long did it take?

Nolita: We just cracked on and were able to open again in nine days time. I was cleaning up until 7pm every night, which was when the sun went down. There was no electricity or I’d have carried on.

How did your staff respond?

Nolita: We have eight or nine employees who rely on the business, too, and that was one of our main worries. They were brilliant. Everyone pitched in, and we even had customers offering to help us out; neighbouring businesses giving us a hand. It’s been really touching.

What are the main problems?

Nolita: First, getting hold of professionals such as electricians involves a wait, as does reordering supplies from mainland Spain, so we just had to accept that. Then there’s the insurance – we don’t think there’ll be a problem, but the money isn’t through yet so we’ve had to dip into savings.

The place looks fantastic. Are you back to normal now?

Charlie: I’d say we’re two thirds of the way there. We’ll have finished by mid-March, and St Patrick’s Day.

Nolita: Were getting safer fryers, for a start. But really, what we’ve most learnt is how helpful and supportive people can be, and we’d like to thank everyone for that.