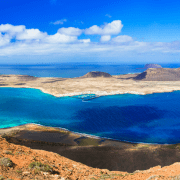 A man from La Graciosa with coronavirus symptoms and a passenger on Friday’s flight from Madrid who had a temperature have both tested negative for Covid-19.

A negative test result has shown that a man who was evacuated from La Graciosa yesterday is not suffering from coronavirus. The man, who had visited Tenerife recently, was taken to the Dr José Molina Orosa Hospital in Arrecife after reporting symptoms consistent with Covid-19.

Meanwhile, the man who broke State of Alarm quarantine regulations on Friday by travelling from Madrid airport to Lanzarote after being in contact with a Covid 19 sufferer has been confirmed to be suffering from the virus in a second PCR test. This test is in addition to the positive one carried out in Castilla-La Mancha which led to that region’s authorities warning Lanzarote emergency services, who were waiting on the tarmac when the plane landed.

Another passenger on the Madrid flight , who was reported as having a high temperature of 38 degrees on landing, has tested negative and is no longer required to isolate. 120 other passengers have also been told they can carry on with their normal lives as long as they monitor their temperatures twice a day. The 14 passengers with seats closest to the man who tested positive have been told to self-isolate for a fortnight, or until tests are conducted.

This means that Lanzarote now has three active cases, two of whom are recovering in hospital after recently testing negative. Friday’s passenger is under strict quarantine at his Lanzarote residence.

A sixth two-week extension to the State of Alarm is likely to be approved in parliament shortly , after Pedro Sánchez reached agreements with two of the parties key to passing the vote. The Basque nationalist PNV will support the vote and the Catalan ERC who will abstain on the condition that this is the final extension before power is returned to the regions.

The vote in Spain’s congress will take place on Wednesday.  Sánchez always intended that this would be the final extension, and if current progress continues, it will see much of Spain, including the Canaries, leave the final phase of the lockdown plan.