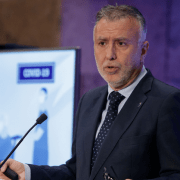 Canarian President Ángel Victor Torres yesterday claimed that “the worst is over” in the fight against coronavirus, and said that, as the Canaries could not afford a second lockdown, the islands must learn to coexist with the coronavirus.

Speaking at a meeting to mark the anniversary of his first year in control of the regional government, Torres warned that another lockdown would be “dramatic” for the Canaries, because “no public response would be possible” due to lack of funds.

“The public sector doesn’t have the resources to cope with another halt in the economy,” said Torres, and suggested that economic activity would have to “find a balance and co-exist” with the pandemic.

The regional leader said that, even without a second lockdown, the situation is going to be difficult. He claimed that a budget surplus should see the islands through to the end of this year, but predicted that the next three years of his legislature, 20121 to 2023, will be more uncertain

The current volume of public spending “is impossible to maintain”, said Torres, citing Spain’s €4 billion monthly bill for ERTE (furlough) payments “Even if we all stay indoors, the virus remains in the street and there will be an increase in poverty. This is the second evil we face,” Torres warned.

The Canarian President pointed out that, in the case of new outbreaks, he would not hesitate to return the islands to one of the earlier phases of the lockdown exit strategy, as has already occurred in Catalonia and other zones of Spain which have experienced an increase in infection rates. He also said that compulsory mask-wearing could still be extended, but that “the circumstances don’t require it at the moment.”

Torres said that,” although the enemy is powerful and deadly”; citizens are now better educated, and health services are better prepared and better equipped to tackle the virus. For that reason he believes “the worst is over”. He praised health services for functioning well in tracking and tracing cases, but warned that family reunions and gatherings of friends were situations that offered the “highest risk” of contagion, and asked Canarians, and especially young people, to take special care to observe the rules.

Bouncing back: Macassar!
Scroll to top