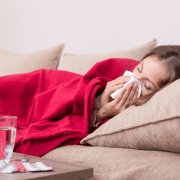 Flu is not as deadly as Covid-19, but this winter’s flu season will still provide challenges for Canarian health professionals, adding pressure on health services and increasing risks of transmission.

Everyone who lives on the Canaries knows that year-round sunshine and warmth doesn’t keep the flu away. An annual bout of “gripe” is experienced by many islanders, and every year the flu also takes lives.

In the Canaries, flu observation season starts in the 40th week of the year and finishes in the 20th week of the following year, a 32-week period stretching from October to mid-May. The Canarian Health Service produces a detailed report of each season, allowing them to monitor the progress of the different types and strains of flu virus that have a varying impact each year.  Those that affected the Canaries last season are Type A viruses such as H1N1 and H3N2, and a type B virus.

In comparison, coronavirus has claimed 162 deaths in the Canaries since mid -March, a figure that occurred despite a strict lockdown in a region that escaped relatively lightly compared to other regions of Spain. There have been 115 coronavirus cases for every 100,000 people in the Canaries (the average in Spain is 553 cases), while the figures for flu on the islands reached a rate of 300 per 100,000 at the peak of this year’s epidemic.

Of course, many thousands of cases of flu go unreported each year, and the recent random testing project in Spain has confirmed that many COVID-19 cases have also gone untested and thus unreported. But taking reported cases into account, flu still has a far higher incidence and a far lower death toll.

The real threat from flu is the demand it could place on the island’s health services at a time when a second wave of coronavirus is most feared. Mask-wearing, handwashing and social distancing could help to limit flu transmission, and there is likely to be a strong campaign for flu vaccinations this winter, too.  The simple fact that flu brings so many people to health centres may increase the risk of transmission.

Last year, almost 90% of people hospitalised for serious symptoms of flu on the Canaries were not vaccinated. While the annual flu shot is not effective against coronavirus, a large study in Brazil has recently suggested it may be a defence against the more serious complications of the disease.

A British tourist tested positive for coronavirus yesterday. The woman was staying at a hotel when her partner was detected as suffering from fever at reception. Protocols were activated and the couple were tested. The partner’s test resulted negative but the woman, who was asymptomatic, turned out to be positive.

In addition to a man who returned from Mexico and tested positive, and six migrants who arrived on a patera on July 8th, this brings the number of active cases on the island to 8.

Make friends and discover Lanzarote on a bike!
Bouncing back: Macassar!