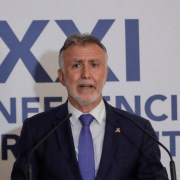 Canarian president Ángel Victor Torres has returned once again to the subject of testing at airports, calling for a European airport tax that would cover the costs of testing on all passengers.

Torres made the suggestions at a conference of regional presidents in La Rioja, urging Spain’s leader Pedro Sánchez to work with European counterparts so that the European Aviation Safety Agency (EASA) could establish the tax.

Torres once again highlighted how well the Canaries had dealt with the coronavirus crisis so far, but said that “it is logical” that there will be more cases now that full mobility has been achieved. This, believes Torres, is the reason why tests are so vital.

The Canarian President did not specify whether the tests he had in minds would be at origin or at destination. He has previously said that tests at origin were the best idea, but in their absence “We’ll do the tests here”.

Spain’s Health Ministry has previously rejected PCR testing at airports as unworkable and unreliable, but the subject is back on the agenda following the wave of new outbreaks throughout Europe and the world.

Austria was one of the first airports to establish PCR testing, which results in a certificate that passengers can show to prove they are free of the virus.  The tests at Vienna cost €190.

Several German airports have also been offering free PCR tests to passengers returning from high-risk countries, while Greece has introduced random tests on certain arriving passengers. Other airports have PCR testing capacity for passengers who are detected to have a high temperature or other symptoms.

Meanwhile, in the UK, John Holland-Kaye, the director of Heathrow Airport, has called for Boris Johnson to ease quarantine restrictions with a testing regime. Holland-Kaye has stated that Heathrow – the busiest airport in Europe before the crisis – could have tests up and running within two weeks, and has proposed a two-test system that would cut the period of quarantine that arriving passengers would be subjected to.

Because recently infected people do not always test positive, Holland-Kaye suggests that tests are carried out at the airport and, if negative, repeated five or eight days later. If the second test is also negative, the passenger will be free to leave quarantine. Each test would cost £150 and be payable by the customer, said Holland-Kaye.

However, any such system is unlikely to be adopted in the Canaries. Regardless of who bears the potential costs of two tests per passenger, the prospect of a week’s quarantine on arrival would discourage most holiday makers to the islands.