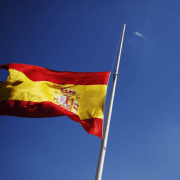 Spain’s council of ministers had declared 10 official days of mourning starting today and continuing until the 6th June. It is the longest period of official mourning  since Spain’s return to democracy in the late 70s.

The mourning period will commence with a minute’s silence at 11 am today (Canarian time). The national flag will be displayed at half-mast on all public buildings and naval vessels, and an act of homage is being organised that will be led by King Felipe VI.

According to the government, the mourning period is “a call to all the country to come together and dedicate a solemn, serene and sincere moment to everyone who has died during this pandemic.”

27,117 people have died of coronavirus in Spain to date, the fifth highest toll in the world after the USA, the UK, Italy and France. The large cities of Madrid and Barcelona were the worst-affected areas, and the over-70s accounted for over 80% of deaths.

On the Canaries, 158 people have died, with 6 of those deaths occurring on Lanzarote.

Germany to give green light

On 15th June, Germany plans to to lift warnings to its citizens not to travel to Spain and several other European countries. The plan was detailed in a government report titled “Criteria to Permit Intra.-European Tourism” and will be dependent on good progress in relation to the pandemic.

Elsewhere, the massive German tour operator TUI has welcomed Pedro Sánchez’s decision to lift quarantine requirements for foreign tourists from July 1st. “Now we can plan journeys to the Canaries and other Spanish destinations and millions of tourists can spend the summer safely in Spain. This is good news”,  said the company in a press release.

Certain classes have already restarted in the Basque Country, Galicia and the Balearics – other communities which entered Phase 2 of the lockdown exit plan on Monday. However, up until now the Canarian Education Council has issued no instructions for schools and education centres on the islands, causing unions to complain of a “total absence of leadership.”

Guerra was replaced by José Antonio Valbuena, who will meet with unions and associations.