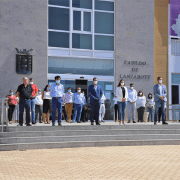 Canarian President Ángel Víctor Torres has said that the time to increase flights between the Canaries and mainland Spain will be during Phase 3 of the lockdown exit plan. In Phase 2, which we are currently in, connectivity should be increased between the islands themselves, he said.

Torres said each phase brings “more economic activity, and that implies an increase in connectivity” before saying that, during Phase 2 – the phase we are currently in – work must be done on improving connections between islands.

However, Torres’s words do not reflect the legal situation on the islands, where inter-island travel is likely to remain restricted for some weeks. This is because non-essential travel between provinces remains forbidden until the end of Phase 3 on  22nd June at the earliest, meaning eastern Canarians in Las Palmas province must still wait weeks to visit the western province of Santa Cruz de Tenerife. Unless the law is changed, non-essential travel will remain forbidden to anywhere in Spain until  22nd June, at the earliest.

The national government plans to open “safe corridors” between areas of Spain that have passed Phase 3, as well as with foreign countries that fulfil health requirements. These corridors will be proposed to the European Union after being discussed today at a meeting between regional governments and central government. However, Canarian representatives are also negotiating directly with the British and German embassies.

Tías Ayuntamiento has published a list of requirements to be observed by bars and restaurants who wish to extend terrace space.

Alongside the national requirements reducing terraces to 50% of normal capacity and stipulating a two-metre distance between tables, the Ayuntamiento will permit owners to extend terrace space.

Tables must not invade parts of the street reserved for vehicles, must not block garages or other access zones and must not cause “inconvenience to residents or adjoining activities” . Owners are not allowed to carry out building work on extended areas, but may request the temporary remoival of municipal property.”

In order to leave space free for pedestrians, it may also be possible to occupy parking spaces. All extensions must be requested from Tias Ayuntamiento, which has published the requirements at www.ayuntamientodetias.es (Ayuntamiento/Bandos).

Preparing for a second wave

The Canarian Health Service has asked staff to arrange holidays between July and October in order to be prepared for a second “intense outbreak” of Covid 19 in winter.

The Health Services’s human resources department has contacted staff to ask them to arrange holidays “outside of the time period stretching from November to January,” when they fear that the annual flu season could coincide with a second wave of Covid 19 infections. This could lead to a “peak of assistance at health centres which will require all staff to provide services.”

A minute’s silence was observed by all public authorities on Lanzarote yesterday at 11 am. The ceremony marked the beginning of a 10-day period of mourning for victims of the Covid 19 pandemic.

Bouncing Back: The Mill Restaurant and Bar
Scroll to top