Our cover star this month will be well known to many people in the resorts. Jake Hanson arrived on Lanzarote with his saxophone and has hardly stopped playing since. We interviewed him: 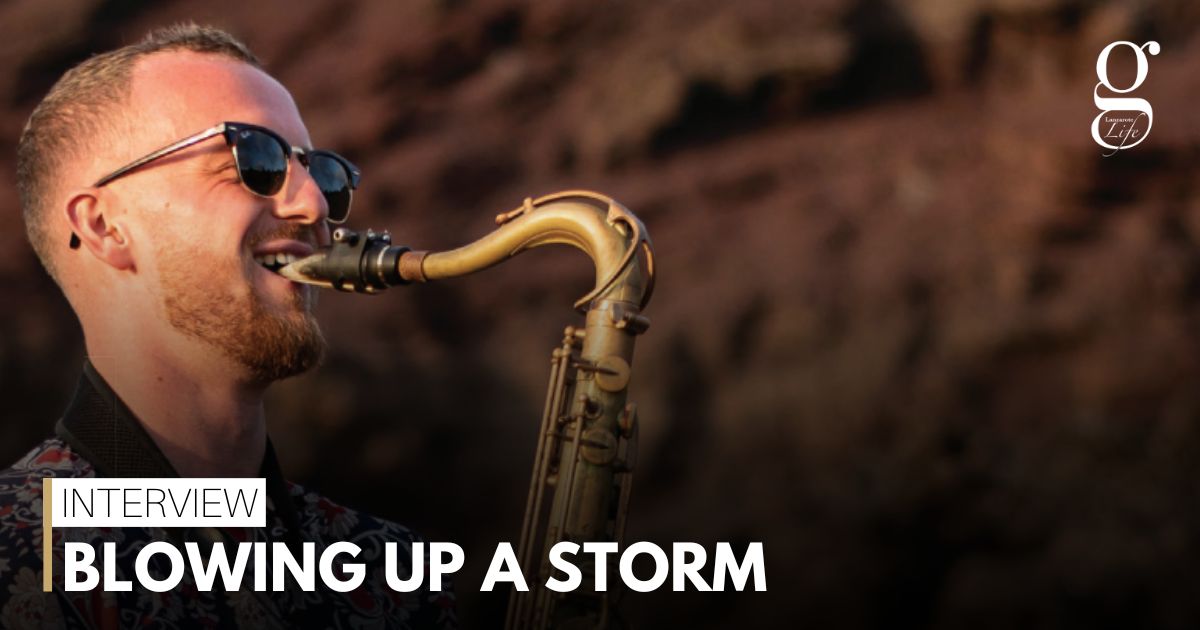 HOW DID YOU END UP HERE, JAKE?

I actually lived and went to school here until 2005, before my family moved back to Scotland. In 2020, I graduated with a First-Class Honours degree at Edinburgh College, and had been working at the Co-Op while I studied. Afterwards, I was working there part-time while building up my private tutoring for saxophone and gigging in Glasgow and Edinburgh. When lockdown hit, I decided to come to Lanzarote and I brought my saxophone with me.

I met my friend Gemma that summer. She’s a fitness instructor, and one of her classes was a Spin Class. She had the idea of a spin class, with me playing the saxophone as well. In the space of a week, I was being approached by parties and I extended my holiday twice to stay on the island and play.

HOW MANY NIGHTS DO YOU PLAY NOW?

Six nights a week, often with two or three shows a day. It’s easy enough to travel with just a sax, and I’ve just passed my Spanish driving test. All I need now is a decent car!

It can be pretty exhausting – it’s not easy to play for two hours nonstop. But the main risk for a pale Scot like me is playing in the sun!

HOW LONG HAVE YOU BEEN PLAYING?

I started when I was 12. It was a hobby and I ended up playing in the school band. When I left secondary school to pursue music, my mum bought me my first saxophone for my 18th birthday and that’s the instrument that got me through my studies at Edinburgh College. I still have it to this day and I brought it over to Lanzarote with me, although I don’t play it much now since it is an alto!

WHO ARE YOUR FAVOURITE SAX PLAYERS?

I’ve got a lot of respect for Michael Brecker, Grover Washington and other musicians like that.

WHAT SORT OF STUFF DO YOU PLAY NORMALLY?

Soul and jazzy stuff, anything from Motown to Bruno Mars, really. I’m always keeping my ears open for new stuff, too. I play alone, but I also love to play with others – I perform with the singer Aimee Louise every Sunday at Café La Ola, and I’m starting to do monthly gigs with The Skatoons.

ARE THERE ANY SONGS YOU’RE SICK OF BEING ASKED FOR?

Baker Street. I refuse to play it.

ANY HIGHLIGHTS OF YOUR TIME HERE?

New Year’s Eve this year was great. I was playing at Coco Bongos, and for the previous months Covid had made it difficult to fill the bar at times. That night the bar was full, and there was a huge queue of people outside. I ended up playing in the street to about 50 or 60 people, all dancing and getting into it. That night meant so much, as it marked the start of tourists properly coming back to the island and gigs have been great since then.

WHERE CAN WE SEE YOU PLAYING, JAKE?