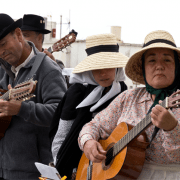 Lanzarote’s Cabildo has been meeting with the island’s seven ayuntamientos to discuss the possibility of abandoning the summer programme of local fiestas and diverting the budget for these events to social causes.

Lanzarote’s fiesta season is a series of traditions that see villages and towns throughout the island staging events to celebrate the feast day of the local church’s  patron saint or virgin.  Fiestas normally last around two weeks, and generally feature dozens of outings, sporting tournaments, concerts, children’s events and open air dances, concluding with a special religious mass and a parade.

On Lanzarote, the fiestas of Carmen in mid-July are celebrated from La Graciosa to Playa Blanca, while the fiesta of San Ginés in mid-August is one of the island’s most historically important fiestas. September brings the island’s biggest cultural event – the pilgrimage to Mancha Blanca to pay homage of Our Lady of the Volcanoes.   Smaller events are celebrated in almost every corner of Lanzarote over the summer.

No events until 30th September

The Cabildo’s proposal is to cancel all fiestas from the end of Spain’s state of alarm until the 30th September, limiting the permitted activities to certain religious events that must be carried out according to whichever public health measures apply.  Those health measures, which limit the amount of people attending events indoors and outdoors and insist on social distancing measures, are likely to remain in place for some time, and seem incompatible with many of the social events that take place during fiestas.

Sporting events will also be cancelled for five months, wiping out a summer programme of gatherings that range from the endurance events such as the Wine Run to several swimming travesias.  Many fixtures on Lanzarote’s sporting calendar , such as the Ironman , have already taken the decision to cancel this year’s edition.

The Cabildo has already met with the mayors of the island’s seven Town Halls  to discuss the proposals, and an announcement is likely to be made before 15th May.

All eyes on the ERTEs
Scroll to top