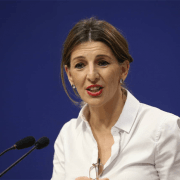 Spain’s Employment Minister , Yolanda Diáz, has pledged to give special attention to the tourism sector and to affected regions such as the Canaries when considering the extension of Spain’s ERTE (furlough) schemes.

As Spain faces the prospect of returning to the “new normality” after seven weeks of lockdown, the scale of the daunting challenges ahead becomes more evident. Canarian President Ángel Victor Torres has already said the islands face “social and economic collapse” and has been vigorously petitioning central government to make the economy of the islands a priority.

Yesterday, Torres won the provisional  support of Spain’s employment minster, Yolanda Diaz, who pledged that regions which rely on tourism and which have been worst affected by the coronavirus crisis will be given special attention when the issue of extending ERTE schemes arises.

Once the government declare that the extraordinary conditions for such schemes no longer apply, employers will face the decision to rehire or dismiss their staff.  Currently, the law relating to ERTEs means that employers must retain staff for six months after rehiring them, or face crippling penalties. Thousands of businesses fear that this could lead to bankruptcy.

There are also calls to permit businesses to stagger the rehiring of employees, allowing them to return when it is economically viable to do so.  Businesses say that if the government is re-opening the economy step-by-step, then they should be permitted to do the same, taking on some staff while others remain under the ERTE scheme.

Some members of the Canarian hotel sector has asked for ERTE schemes to be extended until the end of the year, while other sectors have set the time limit as  until the re-establishment of international flights. However, much will depend on how much debt the government can bear to take on.

Yesterday, restaurants were permitted to reopen for customers to pick up pre-ordered meals. However, it seems the vast majority of them decided that this was not going to be economically viable. There appeared to be a better take-up for hairdressers and opticians, but many of these also remain closed.

If the Canaries meets the health ministry’s conditions on the 11th May, as seems likely,  restaurants and bars will be permitted to open their exterior terraces at 50% capacity, but many of them are not expected to take advantage of this, either.  In Arrecife, the Coalicion Canarias party have urged the Ayuntamiento to relax the normal by-laws governing terrace space on pavements and public spaces outside bars and restaurant, giving owners the option of putting more tables out.