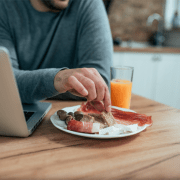 Spain’s lockdown started with a rush to buy staples such as pasta and rice. Now, however, the fear of shortages has eased off and people are simply more interested in not getting bored. As a result, luxury snacks such as crisps, nuts and olives have seen high sales as Spaniards adjust to couch potato living. If you want to join them, here’s our guide to Spanish snacks.

For many years, Spain was part of the vast, flavourless-crisp continent of Europe, where the only flavours available were salted or paprika. Meanwhile, things had got completely out of hand in Britain, where prawn cocktail and spring onion had given way to Sweet Thai Chilli and even Hedgehog flavours.

It was American global brands such as Pringles and Lays that started to change things, and now Spain boasts a fairly decent selection of crisp flavours. Salt and vinegar and cheese and onion are standard, but it’s worth trying local flavours such as jamón, garlic, or the tasty herb ‘n’ tomato Receta Campesina flavour.

Here at the Gazette, a recent culinary highlight was finding a packet of Huevo Frito (fried egg) crisps in a garage, and blending them with British Smoky Bacon for one of the greatest crisp sandwiches in history.

Spain produces more olives than any other country, and you’ll find all sorts of types in supermarkets. Avoid black ones, which are almost always disappointing unless you can find the negra de Aragon variety; and instead focus on the range of green olives, from standard manzanillas to fat gordales and tiny arbequinas.

It’s worth experimenting with different jars, too, as the brine used to preserve the olives is often flavoured with peppers, anchovies, herbs or other ingredients.

Large capers (alcaparrones) are another typical Spanish snack, delicious with some toasted almonds and a glass of chilled fino sherry.

Known as frutos secos (dried fruits) in Spanish, nuts are a large section of any supermarket. They range from standard peanuts to walnuts, pecans, hazelnuts, cashews, pistachios and, of course, almonds. Almonds are one of the most popular ingredients in Spain, and they’re available in all sorts of styles.

You’ll also find various “cocktails” of mixed nuts, which are worth trying until you find one you really like.

Maize is especially popular in the Canaries – kikos are maize kernels that are fried and salted, and available in normal or jumbo sizes, while popcorn has always been popular in Spain, too.

Sunflower seeds (pìpas) are an ancient tradition in Spain going back to the days when field workers snacked throughout the day to keep energy levels up. They are salted lightly, toasted in their husks and sold in large bags, which usually keep people happy for a long time, as they pop seeds into their mouth individually and spit out the husk.

Pumpkin seeds are also sold, and are a popular snack or addition to salads; while sesame seeds, linseed or flax, chia and poppy seeds are all available, but not generally eaten as snacks.

Sliced jamón, chorizo, salchichón, fuet and other preserved meats are always a popular Spanish treat, and probably too tasty for your own good. Torreznos are the Spanish versions of pork scratchings, and are usually drier than the British version, although every bit as unhealthy.

Anchovies, either tinned in oil or steeped in vinegar, when they’re known as boquerones, are probably the most popular fishy treats, although little dried gueldes (whitebait) are a Canarian speciality for those who can handle really salty, gamy flavoured snacks.

Quarantine to be lifted on July 1st
Scroll to top