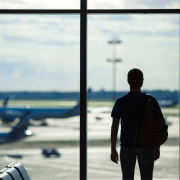 The European Air Safety Authority (EASA) has established a set of protocols that give an idea of how different flying in the future is likely to be from what we’re used to.

The rules have been approved by Spain’s Association of Airlines, and are designed to provide maximum safety for both passengers and crew. They include measures for the six separate stages of every flight : arrival at the airport; the departures area and gates, embarkation,  on board the plane, transit and arrival/disembarkation. There is also a section devoted to crew.

The rules include recommendations that those who accompany passengers to the airport but who do not intend to fly should not be allowed into the airport. A distance of 1.5 metres should be observed during check-in, security scans and boarding

Mask use will be compulsory during all stages of a flight  and masks must be changed every four hours on longer flights – a rule that is likely to affect routes from the UK/Ireland to the Canaries. Temperature checks are recommended, although left up to local authorities, and the EASA has not recommended that passengers are separated by empty seats – a measure that airlines have complained is economically inviable.

Canarian President Ángel Victor Torres also addressed the issue of flight safety yesterday, saying that it would be necessary for any visitors to the island to show a negative PCR test for COVID 19 or “equivalent analyses”. Torres did not specify when, precisely, such a test should be taken in relation to flights.

Torres hailed Pedro Sánchez’s Saturday announcement that Spain would open for tourism in July as “good news for the Canaries and Spain”, while stressing that “this must be done with maximum health security”.

“It’s fundamentally important that the planes arrive full,” said Torres, “But in order to do so, we need tests at origin.”  Torres added that further tests should be carried out when tourists leave the island, and that all visitors should be monitored with a tracking app while on the islands.

10 Days of official mourning from tomorrow

From tomorrow, Spain will observe 10 days of official mourning for the victims of coronavirus.

During his address on Saturday, President  Pedro Sánchez said that Spanish society “had halted the the worst health disaster in the last century”, and announced that flags on public buildings and naval vessels would hang at half-mast for the duration of the “longest period of mourning in the history of democracy.” .

King Felipe VI will also lead an official act of homage to the victims.