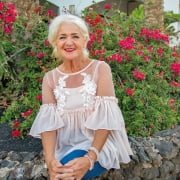 Gerie B has been one of the island’s favourite entertainers for almost 20 years. Julie Helliwell met with her to find out more about her singing career and how she keeps it so fresh and vibrant!

How long have you been a singer?

I’ve been singing all my life. I sang with my Dad’s band, The Al Rath Dance Band, when I was 14. I did a few shows with them, but I didn’t have much confidence at that age. My Dad was an amazing showman and I think he’d be proud of me now. I met my husband when I was young. We started a family and he already had kids, so raising seven children meant I had a late start to my entertainment career.

I became a professional singer by accident really, when I was 36. We had a pub, and one rainy night, a woman came in to sing karaoke. She was called Christine Brennan and I thought, “Wow”. I sang too, and she thought, “Wow”. After talking, we decided it was now or never and formed a duo called ‘Feminine Touch’. We won an award in the Variety Club of Great Britain and work was coming in fast.

Christine and I came here on holiday over 20 years ago. We did a bit of singing and were invited back three times that year. The following year, we came for a month and did a gig at Las Calas. From that, we had a show every night. We then went into business with a guy and opened Bonkers, a cabaret showbar. After a year, Christine had an accident and had to go home so I became a solo artist. It’s my 20th anniversary next year, so I should do something to celebrate it!

How have things changed?

The money’s halved! With the depression, people in England were struggling financially and the island suffered with fewer tourists. But I do think that the entertainment scene is booming now – especially in Costa Teguise. Within five minutes, you can find great entertainment and venues. Audiences still want to be entertained, rather than sung at, but I think it’s harder to entertain younger audiences and you have to find other ways to engage them. I have a comedy element to my show where I’ll use wigs or props when singing Cher, Dolly Parton or Tina Turner. People won’t let me drop that side of it and continue to ask me to do it.

Coming from a cabaret background, I had a broad base, but over time, my voice has matured so I now sing other styles, like rock. It just depends what the audience want. I can instantly change my show, and I think flexibility is the name of the game, especially when you’re playing at the same venues and to people who come back year after year. I’ve got a few people that have been coming to see me since the beginning.

Tell us about the band

We’re called The Sound Collective, and it’s a collective of eight wonderful musicians who each contribute their own area of expertise. For me, the Latin rhythms and tempos that we play fit well with the island and will appeal to all nationalities. We take songs and freshen them up, making them our own. I have recorded three solo albums and would like to do a country one in the future, plus an album with the band eventually.

How many songs can you sing?

If I sang my entire playlist, I could sing for at least 24 hours. As long as the audience are enjoying it, I enjoy singing any genre, and I really like introducing new songs. I also really love doing Latin music with the band that I’m in. That’s what attracted me to the island in the first place; bars with small rooms and different styles of music in each.

Eye in the sky
Face to Face: Mayor of Teguise

It’s all about the people
Scroll to top