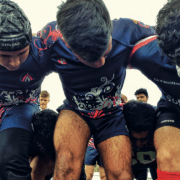 After almost a year without a game, Lanzarote Seniors were back in action against La Laguna at the beginning of February, and were hoping to emulate the success of the Juniors this season.

And it wasn’t long before the Conejeros were back in the groove again, using their expansive game plan well to stretch the opposition’s defence and score a superb try in the opening minutes through Diego Pirata. The superior handling and power of the home side proved too much for La Laguna, and by half time two further tries had been notched up, with dynamic flanker Juan particularly impressing.

The younger, fitter La Laguna side managed to score three excellent second half tries to give the scoreline some a fairer reflection of the action, but it was Lanzarote, with further scores from Juan, Pol and Mati, who ran out comfortable winners Final score: 44-18

Meanwhile, the youngsters of the Lanzarote rugby school were once again on the road in February, attending the Las Palmas tournament with some 25 participants making a very early start. Our youngsters, aged from 6 to 18, produced some quality rugby, noted by the other teams present. Many thanks to all involved, whom we look forward to hosting on Saturday April 25th here in Lanzarote at our own junior tournament!

Passing the test
Battling for survival in the sunshine