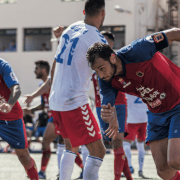 It’s been a strange season for Los Rojillos (The Reds). They have only lost six of their 25 matches but, incredibly, have drawn 15 games which leaves them in 16th spot; just four points clear of the relegation positions in the Tercera División (Fourth Tier).

A super 2-0 home win on the 2nd February against Fuerteventura side CD Unión Puerto was a huge morale-boosting victory but again this was followed up by two consecutive 1-1 draws.

The atmosphere at the home matches has been excellent this season with tourists enjoying the antics by the local fan club Trifulka. This group of lads and girls sing their hearts out and bang their drums from the first until the last whistle.

The new club President and the board of directors are delighted and humbled by the support shown by people who are on their holidays, as well the many British and Irish supporters who call Lanzarote home.

Prior to the match against fourth-placed side UD Tamaraceite on the 16th February, I visited the Sports Bar 100 yards up the road from the stadium. It was heaving with local and tourist fans all enjoying a pre- match drink.

Whilst Britain was getting battered by floods and gales and concerned phone calls headed north, there weren’t too many people worrying about Lanzarote’s plight. Instead of Storm Dennis, Sunburn Steve was the main enemy here, with temperatures in the mid 20’s and no respite from a cloudless blue sky. I have to say those fans coped well, even though they were forced to cool down with several ice cold beers.

There’s no doubt that watching football in the sunshine whilst drinking a cool beer and walking to your shaded seat wearing your flip flops is becoming more and more popular.

There are seven home matches remaining this season. All are in Arrecife which is simple to get to on the local bus. The entry fee is a fraction of Britain with children 18 years and under admitted free of charge. Always check website or Facebook page (details below) for confirmation of kick off time etc.

Make friends and discover Lanzarote on a bike!
Do it Lanza Style